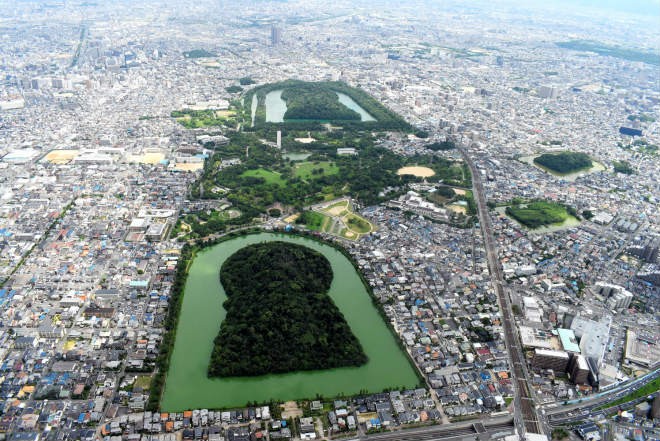 The Mozu Misasagiyama “kofun” burial mound, foreground, which is believed to be Emperor Richu’s tomb, and the Daisen kofun, top, believed to be where Emperor Nintoku is buried, and other smaller kofun can be seen from an altitude of 600 meters in Sakai, Osaka Prefecture, on July 10. (Yasufumi Kado)

SAKAI, Osaka Prefecture--Helicopter rides will be offered for a limited time to provide a bird’s-eye view of dozens of ancient “kofun” burial mounds here, part of the latest site in Japan granted UNESCO World Heritage status.

For three days from July 13, the flyovers will take passengers over the Mozu area, which includes the Daisen kofun believed to be the burial site of Emperor Nintoku. At 486 meters in length, it is the largest kofun in Japan.

A temporary heliport for the service is located in Umi tono Fureai Hiroba park facing Osaka Bay in Sakai’s Takumicho district. It is about 7 kilometers from the cluster of kofun.

The helicopter will fly at an altitude of 450 meters to give the sightseers the best view of the huge, keyhole-shaped burial mounds, which date back to the late fourth and early sixth centuries. Total traveling time will be six minutes.

The tours will be provided by Tokyo-based S.I. Net, a general incorporated foundation engaged in aviation services and disaster preparedness, with the cooperation of the Sakai municipal government.

Sakai Mayor Hideki Nagafuji and media reporters took a test flight on July 10, four days after the cluster and others in Habikino and Fujiidera were approved for inclusion on UNESCO’s World Heritage list.

“I could really feel that the cluster of kofun that still exist in a densely populated urban area are treasures of human beings,” Nagafuji said.

The helicopter, which can carry up to three passengers, arrived over the cluster in the Mozu area about three minutes after takeoff.

On land, views of the Daisen kofun are blocked by three layers of moats. But from the air, each green tree covering the ground of the burial site could be discerned.

Daisen park, which contains 10 or so kofun in all sizes, and the nearby Itasuke kofun and Nisanzai kofun looked like green islands floating over an urban sprawl.

“We are considering providing another series of flights after this service ends,” an organizer of the tour said. “The dates will probably be on holidays.”

Nagafuji also said the city was considering other ways to show the kofun, such as using hot air balloons or seaplanes.

The tour organizer will accept reservations at Umi tono Fureai Hiroba park on a first come, first served basis from 9:30 a.m. to 4:30 p.m. from July 13 to 15.