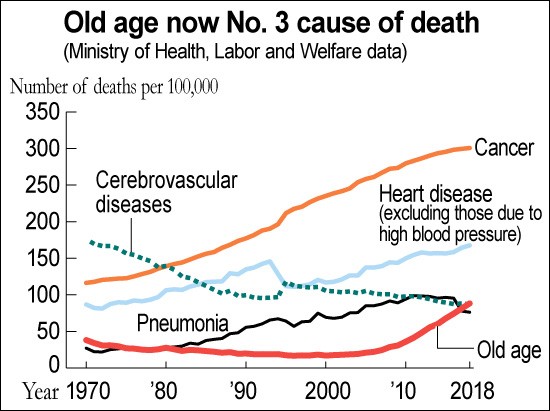 More people in Japan are dying of natural causes due to old age and it now ranks as the third leading cause of death after cancer and heart disease, according to the health ministry.

Ministry figures show that about 110,000 deaths were registered as due to old age in 2018.

The increase was mainly attributable to the fact that more people are living into their 90s and beyond.

Dying of old age is regarded as “natural death.”

The number of people dying of old age had been dropping since hitting a peak in 1947, two years after the end of World War II. But the figure has been rising since 2001.

Death from old age in 2018 accounted for 8 percent of all deaths in Japan.

Cancer remains the leading cause of death with about 370,000 people succumbing to the disease last year, followed by about 210,000 people with heart diseases. The figure excludes those who died of complications resulting from high blood pressure.

The rise in deaths due to old age mainly reflects rising longevity rates.

The number of people aged 90 or older stood at 2.18 million as of October 2018, up about 900,000 from a decade before, according to the internal affairs ministry.

Among those aged 95 or older, old age was the primary cause of death.

Deaths from cerebrovascular diseases that dominated statistics from the 1950s through 1980 have been dropping due to improvements in diet and treatment to control blood pressure.

Medical institutions on occasion decline to aggressively treat elderly people suffering from pneumonia and other diseases on grounds they are “part of the process of old age.”

Such deaths are often registered as due to old age.

The increase in people dying of old age “is also due to the fact that a growing number of people are choosing to die in their homes or (nursing care) facilities instead of hospitals and that those who hope for life-prolonging measures, such as resuscitation of the heart and lungs or intake of artificial nutrition, are decreasing,” said Masahiro Akishita, a professor of geriatrics at the University of Tokyo who also serves as president of the Japan Geriatrics Society.