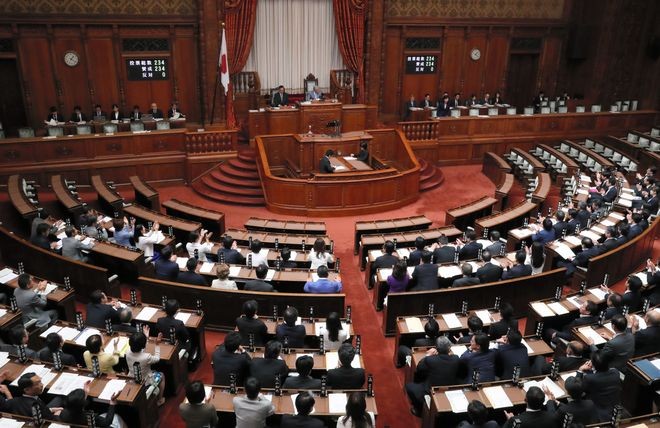 The Upper House plenary session approves the law to promote gender parity in elections on May 16, 2018. (The Asahi Shimbun)

A law to promote gender parity in elections the Diet passed unanimously last spring urges political parties to try as much as possible to field equal numbers of male and female candidates in elections.

The slates of candidates selected by the parties for the July 21 Upper House election, however, do not show any notable progress toward the goal. The huge disparity between the numbers of male and female candidates makes a mockery of the spirit of the law for gender equality in politics.

Women account for only 28 percent of all the candidates for the first national election since the law was enacted.

The figure represents a record-high ratio of female candidates for the chamber’s election. But it is far too small to represent any significant improvement of the deeply lamentable situation.

Only three of the major parties with incumbent Diet members have a ratio of female candidates higher than 40 percent--the Social Democratic Party, the Japanese Communist Party and the Constitutional Democratic Party of Japan. The figures for the ruling Liberal Democratic Party and its junior coalition partner, Komeito, are especially low at 15 percent and 8 percent, respectively.

Do these parties think their poor performances in this respect are not a problem because the new legislation is a “philosophical” law that has no provision to punish violations?

The LDP often defends its dismal gender equality performance by pointing out that it is difficult for the ruling party to increase its female candidates because the number of rookie candidates it can field is limited due to a high ratio of incumbents.

But women constitute only four of the 21 rookie candidates the LDP has picked for both the constituency and proportional representation segments of the Upper House poll.

Prime Minister Shinzo Abe, the president of the LDP, admitted in an election debate among party chiefs that there is no denying that the gender gap among the LDP’s candidates indicates a lack of effort for gender equality. He promised that the party will step up its efforts to raise the ratio to 20 percent or higher in the next election.

But it is clear that it has not been a high priority for the party.

According to the Inter-Parliamentary Union, an international association of legislators, Japan was ranked 163rd among 191 countries in terms of the ratio of women in the lower chamber as of June.

Japan’s position has been declining steadily over the years from the 91st it ranked two decades ago and 104th a decade ago.

A report the union published in March this year says the global average of the ratios of women in lower houses has almost doubled in the past two decades. The average share of women in upper houses has also grown significantly from less than 10 percent a quarter-century ago.

There has been a global trend of seeking to achieve a 50/50 gender ratio in parliaments.

An electoral quota for women is the most effective approach to achieving the target.

“Elections in more than 130 countries today are governed by some type of quota policy introduced at the state or party level,” the report says.

Evidence from upper house elections held in 16 countries in 2018 demonstrated that well-designed quotas can pave the way to greater gender parity. The average share of women elected in upper chambers with a quota for women was about 36 percent, compared with the 16 percent for those without quotas, according to the report.

Many experts argue that simply establishing a law calling for gender parity without introducing a quota system or penalties for failing to meet the target does not lead to a breakthrough.

If the new law turns out to be ineffective, the Diet should consider introducing a quota system.

The share of women in parliaments is rising around the world because society demands female viewpoints in policy making.

Globally, it is becoming increasing difficult for parties not strongly committed to increasing the number of their female candidates to win in elections.

Japan is a rare country where parties fielding only 10 to 20 percent ratios of female candidates have long remained in power.

When they make their choices at the polls, voters should consider which party is really serious about incorporating the views and opinions of women into their policy agendas and which candidates are really committed to working for true gender parity in the Diet.