Kyoto researcher shows his mettle in the face of huge heartache 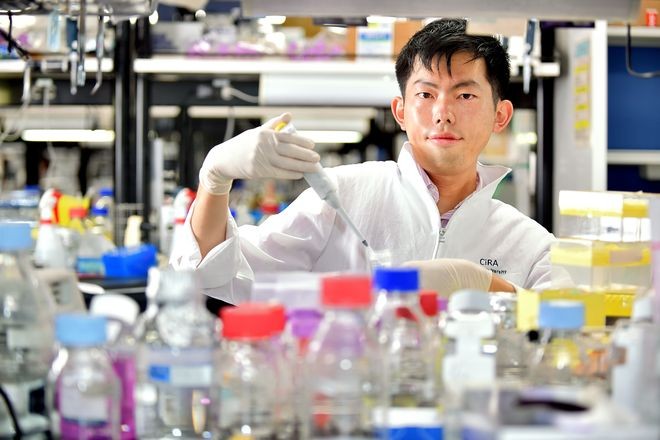 Mitsuru Honda, a researcher of an intractable muscular disease that he has himself, at work in Kyoto’s Sakyo Ward (Mihoko Takizawa)

KYOTO--Mitsuru Honda suffers from an intractable disease that is causing his muscles to atrophy.

But rather simply accept that the condition will not go away, Honda set out to become a researcher in hopes of finding a cure for the illness that is gradually robbing him of movement.

His main research at Kyoto University is in pluripotent stem cells. His repeated experiments with iPS cells led him to become lead author of a scientific paper published by the university last summer on facioscapulohumeral muscular dystrophy (FSHD), the disease that afflicts him.

The 30-year-old program-specific researcher with Kyoto University’s Center for iPS Cell Research and Application (CiRA) was a sixth-grader in Tokyo when he first noticed that something wasn't right with him.

In junior high school, the muscle tissue in his right arm withered to such an extent that he could hardly raise it.

He had to give up playing the violin which he had taken up in elementary school, as well as table tennis, which was a school club activity.

Schoolmates poked fun at the “strange movements” he was making.

Honda finally learned the name of his disease late in his second year at junior high school when he was diagnosed with FSHD by the predecessor of today’s National Center of Neurology and Psychiatry in Tokyo.

“Symptoms will develop gradually, but no remedial measures are available,” the doctor told him.

Honda had a hard time coming to terms with his disease. He began playing the guitar, which did not require him to raise his right arm too much to play, and tried using his left hand to hold a table tennis paddle. But the muscles in his left arm soon also weakened, plunging his spirits to rock bottom.

“This is the time in life to work to develop all sorts of interests, but there are more and more things that I can no longer do,” Honda said to himself at the time. “Why do I have to be the only one going in the other direction?”

Honda continued to study diligently even as he was losing control of his body. He entered the prestigious University of Tokyo after waiting a year to retake the exam.

He initially aspired to major in barrier-free architecture but changed his mind after he opened a textbook during a class in biology, a compulsory subject, and an image of the elaborate workings of muscles leaped out of the pages.

Honda decided that perhaps his best course was to “study my own disease.”

As a graduate student in 2013, he had an opportunity to attend a talk on iPS cells, which have the potential to develop into cells and tissue. iPS cells were first engineered by CiRA director Shinya Yamanaka, an achievement that led to him winning the Nobel Prize in Physiology or Medicine in 2012.

During the lecture, it was explained that iPS cells can be engineered from the cells of muscular dystrophy patients and used to study therapies for, and causes of, the disease.

Honda asked Hidetoshi Sakurai, a CiRA associate professor who was the speaker, a question on the spot: “Is FSHD part of your field of study?”

FSHD is mainly caused by anomalous workings of a gene, but no corresponding state can be reproduced by using cells from mice.

Two years later, Honda began working as a researcher at CiRA by using cells taken from patients with the same disease he has.

His own symptoms provided partial inspiration for the paper he published last August.

In FSHD, muscles tend to weaken asymmetrically on the left and right sides. In Honda’s case, his right arm was the first to lose muscular strength.

A study using iPS cells indicated that stress on cells typically induced by heavy exercise could be one cause of FSHD.

“The arm that is used more often may sustain more damage,” Honda said.

Although ecstatic at having the opportunity to engage in state-of-the-art research, his symptoms are getting worse.

When Honda was a graduate student, he took leave of absence from school with official approval and spent eight months and a half traveling around the world.

It gave him opportunities to interact with local people who were happy to help him. He decided go globetrotting before he ended up in a wheelchair.

Around the time he came to work at Kyoto University, Honda was still able to walk up and down stairs by grabbing onto handrails, but now, he cannot even negotiate a single step. He remains upbeat nevertheless.

Honda has been married for three and a half years to a classmate from his undergraduate days who is hugely sympathetic of his condition.

“Rather than wish for a world without stairs, I would rather direct my attention to the fact that my disease allowed me to experience things that I would not have done had I not been suffering from it,” he said. “If you come to think like that, not everything about my disease is bad.”

Yamanaka, the CiRA director, tries to encourage him.

Honda said he constantly reminds himself that he is a professional scientist and should not be receiving special treatment simply because he is an FSHD patient.

Honda also realizes he may lose command of his hands one day and no longer be able to conduct experiments, but he is still determined to produce results that will help elucidate his own disease.

“Few FSHD patients are motivated to receive regular checkups because of their belief that the disease entails no immediately fatal problems of the heart or respiration,” said Tsuyoshi Matsumura, a doctor in the neurology department at Osaka Toneyama Medical Center who heads a health ministry research group studying muscular dystrophies.

In FSHD, muscles typically begin to weaken around the shoulders in adolescence, although the condition can vary from patient to patient. Facial muscles and those in the legs also start to deteriorate and many patients must rely on a wheelchair around the age of 30 or 40.

Even though there are an estimated three to five FSHD patients per 100,000 population, much remains to be understood about the disease.

Matsumura said he is hoping to start a patient registration system by the end of this fiscal year to help develop therapies for those with the condition.

“There are high expectations that drugs will be developed for intractable neurological diseases,” he said. “A drug is now available for spinal muscular atrophy. Also, another drug for a different type of muscular dystrophy is soon expected to be approved in Japan.”

A patient registration system is also being planned for oculopharyngeal muscular dystrophy, whose symptoms begin with weakened eye movements and later extend to weakened swallowing functions, which raise the risk of developing aspiration pneumonia.

The research group is organizing an open lecture session in Tokyo on July 28 to spread awareness of muscular dystrophies. The lecture will also be broadcast live on the Internet.

Visit the research group’s website (https://mdcst.jp/; in Japanese; opens in a new window) for more details.