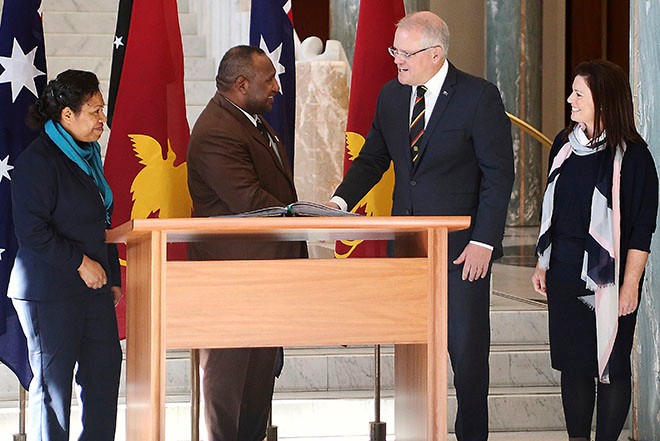 CANBERRA--Papua New Guinea's prime minister said on Monday his country's relationship with China is not open to discussion during his current visit to Australia.

Prime Minister James Marape is making his first visit to Australia since he became leader of its nearest neighbor and former colony in May.

His visit comes as Australia attempts to counter China's growing influence in the South Pacific by teaming with the United States and Japan to finance infrastructure in Pacific island states that the Chinese have aggressively wooed with loans and aid.

Marape said before his meeting with Australian Prime Minister Scott Morrison on Monday that China's relationship with his nation was none of Australia's business.

"We'll discuss PNG-Australia relations with Australia and we'll leave the PNG and China relationship with our discussions with our counterparts in China," Marape told Australian Broadcasting Corp.

Chinese President Xi Jinping made his first visit to Papua New Guinea last year when the Group of 20 countries met in the capital Port Moresby.

The South Pacific island nation has 8 million people, mainly subsistence farmers. The United States and Australia committed to redevelop a Papua New Guinea naval base on Manus Island in an agreement with the previous prime minister, prompting China to caution against "Cold War" thinking. China reportedly wants to establish a naval base in the South Pacific.

The United States is expanding its Marine Corps training hub in the northern Australian city of Darwin--1,600 kilometers southwest of Port Moresby--as part of its strategic pivot to Asia.