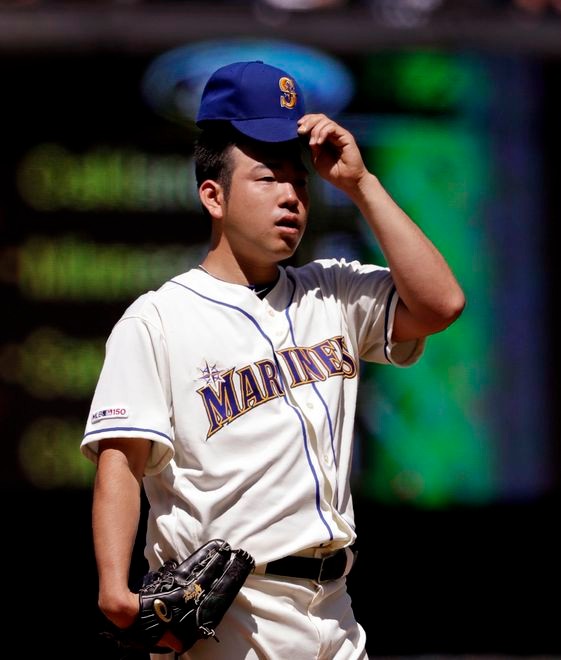 Seattle Mariners starting pitcher Yusei Kikuchi pauses after giving up a run to the Los Angeles Angels in the fourth inning of a baseball game on July 21, in Seattle. (AP Photo)

SEATTLE--Albert Pujols reached another milestone, one that was even better because it came in a win.

Pujols sliced a second-inning solo drive into the right field seats for his 648th career homer, helping push his team another game above .500 with a 9-3 victory over the Seattle Mariners on Sunday.

That shot gave him at least 15 home runs in the first 19 seasons of his career. He joined home run champ Barry Bonds and Hall of Famers Eddie Murray and Frank Robinson on that list.

"All glory to God for allowing me to be healthy for 19 seasons like that to accomplish this number," Pujols said. "But for me at the end of the day it's as much about trying to help my team as much as I can to win games and try to win a championship."

He did his part Sunday with another strong game since the All-Star break. Mike Trout added to his AL-leading totals with his 32nd home run and 79th RBI, and Brian Goodwin hit two home runs.

But Pujols was just as big a part of the offense.

After his home run, he beat the throw on an infield single in the pivotal four-run fourth inning despite a tight hamstring, later scoring to help the Angels take a 5-0 lead. And he made it 7-0 with a sacrifice fly in the fifth.

"Since the break he's been a big part of the offense, actually," manager Brad Ausmus said.

Pujols said he's been healthy this year after a couple of up-and-down seasons and has been able to get his back leg more involved with his swing. He also went to old video with the Angels' team of hitting coaches, looking for inspiration.

"We found a couple of things that I was doing when I had success and we tried to put it together," Pujols said. "It's helping me out so far, but most of all it's being healthy and believing in myself, in the God-given talent that I have."

Seattle rookie Yusei Kikuchi (4-7) continued to struggle, giving up nine hits and seven runs in five innings. The Mariners are 0-3 in games in which Kikuchi and former Japanese high school classmate Shohei Ohtani have faced each other.

Kikuchi struck out Ohtani in the first and induced a groundout in the third before giving up a leadoff double to the designated hitter in the fifth. Ohtani scored on Justin Upton's double.

The left-hander is 1-3 against the Angels and winless when facing Ohtani.

"It's been a little something different every game," Seattle manager Scott Servais said. "Definitely a team he hasn't fared very well against. They put the bat on the ball."