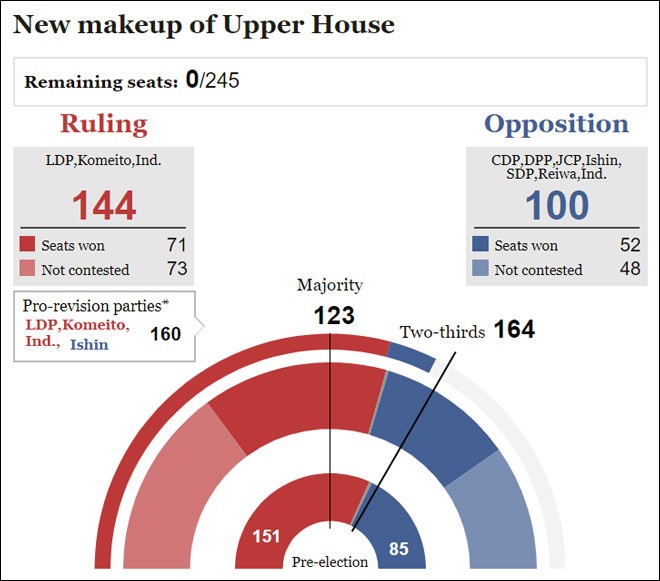 The ruling coalition won a majority in the Upper House election, but Prime Minister Shinzo Abe suffered a setback in his drive to revise the Constitution, according to the final results.

Abe’s Liberal Democratic Party won 57 of the 124 seats contested in the July 21 election. It had held 67 of those seats before the poll.

Junior coalition partner Komeito won 14 seats, giving the coalition a total of 71 seats, surpassing the 63 seats that represented a majority of the seats contested.

But the total number of seats held by the LDP, Komeito, Nippon Ishin and independent politicians who favor constitutional revision reached 160, four short of the two-thirds majority required to initiate a constitutional amendment in the Upper House.

Despite a record number of 17,062,771 ballots cast through early voting between July 5 and 20, turnout was 48.8 percent, the second lowest rate for an Upper House election, exceeding only the 44.52-percent turnout for the 1995 election.

Another new party established to “protect the public from Japan Broadcasting Corp. (NHK)” won one seat in the proportional representation constituency. The party opposes the public broadcaster’s current system of collecting subscriber fees even from TV owners who do not watch NHK.

Nine candidates who ran as independents but had the support of the major opposition parties also won in prefectural districts.

However, overall, the LDP won 22 of the 32 single-seat prefectural districts, while the opposition took only 10, one short of the number of single-seat districts it won in the 2016 Upper House election.

Weather played a role in the low voter turnout. Heavy rain in the Kyushu region led to decreases in turnout of more than 10 percentage points in four prefectures there.

Kochi was the only prefecture in Japan where turnout increased from three years ago.