Lisa’s In and Around Tokyo: Get close to lions and tigers and bears (oh my!) at Fuji Safari Park 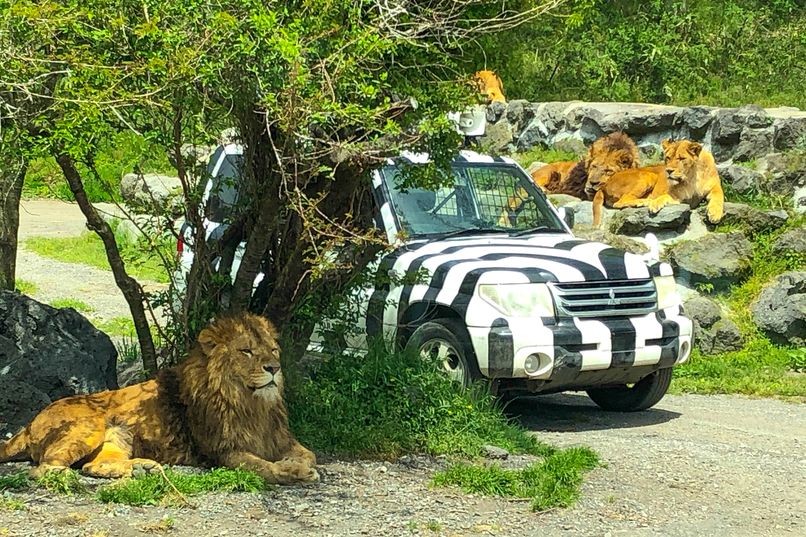 Visitors go on a self-guided tour in a four-wheel-drive SUV painted in a striped zebra pattern in Fuji Safari Park. A variety of wild animals can be observed at close range. (Photo by Lisa Vogt)

I’ve always had mixed feelings about zoos. Seeing fellow Earth dwellers, just because they are a species different from us humans, locked up in cages--yet I wonder, how else could we see real wild animals?

When I was little, my parents took me to circuses and zoos hoping to delight me, but I remember being more curious about the humans oohing and awing over imprisoned animals. I must have been a difficult child!

Fast-forward many years and I found myself in game reserves in Africa fascinated at seeing firsthand the Great Migration of more than a million gnus, gazelles and zebras in Kenya and Tanzania, and witnessing predator-versus-prey battles taking place right before my eyes.

I think children’s “initiation” to the animal kingdom should be seeing animals in their natural habitat and not behind bars. Start with picture books, and then take a trip to Fuji Safari Park for kids to get a glimpse of the kind of place the animals “really” live in.

In truth, the safari park is just a drive-through zoo where animals are separated by discreetly wired pens, but it’s the next best thing from Tokyo if you’re not able to make it to Africa this weekend.

At the park, you can walk, drive your own car, hop on a Jungle Bus, rent a self-driving Navigation Car or view the animals by Super Jungle Bus, which is a cage on wheels where you get a virtual shift in perspective with a wild animal breathing down your neck.

The highlight of my time at the park was seeing an elephant with Mount Fuji as the backdrop. I’m not sure if the elephant was an African elephant, but its positioning reminded me of the herds of elephant families I saw at Amboseli National Park in Kenya with Mount Kilimanjaro, Africa’s tallest mountain, behind it. It was picturesque--uh, Insta-worthy? Or if you prefer, Instragrammable?

There are picnic tables if you’d like to bring your own food, and several stalls sell sweets and street food like burgers, naan tacos and salsa hot dogs. The Safari restaurant’s menu is standard fare consisting of ramen, “omrice” and curry rice served cafeteria style.

A wild family weekend, anyone?

This article by Lisa Vogt, a Washington-born and Tokyo-based photographer, originally appeared in the June 23 issue of Asahi Weekly. It is part of the series "Lisa’s In and Around Tokyo," which depicts the capital and its surroundings through the perspective of the author, a professor at Meiji University.