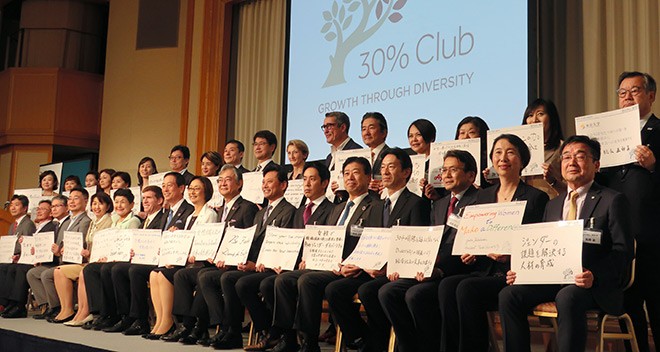 Executives from 14 major Japanese firms have signed on to a global effort to achieve gender diversity by boosting female representation on company boards to 30 percent by 2030.

But the group, which opposes so-called “quota systems,” said it won't require companies to promote women to senior leadership positions just to achieve the numerical goal.

At the July 17 launch of 30% Club Japan, CEOs, chairs and other equivalent executives of large public companies pledged to aim to achieve 10 percent representation of women on the boards of TOPIX100 companies by 2020, and 30 percent by 2030.

The group’s 37 members include heads of major companies such as Ajinomoto Co., Daiwa Securities Group Inc. and Hitachi Ltd.

Presidents of universities such as the University of Tokyo and Showa Women’s University have also joined the effort.

According to 30% Club Japan, the percentage of female board members at TOPIX100 companies is 7.6 percent in 2018, near the bottom among advanced countries.

“People with appropriate skills and experience should assume top positions,” said Michiko Tadamatsu, the group’s campaign manager and senior manager at Deloitte Tohmatsu Consulting LLC. “That's why we'll focus on the infrastructure of the appointment of women."

Founded in Britain in 2010, the 30% Club has campaigned to include more women in senior leadership, particularly at the decision-making table in corporations, which the group believes is imperative to promote managerial innovation and lead to business growth.

The group has expanded to other countries including the United States and Canada. The Japanese club is its 14th branch.

Masahiko Uotani, the male president of Shiseido Co., a cosmetic giant with 45 percent female representation on its board and company auditors, has assumed the position of chairman of 30% Club Japan.

Shiseido has adopted a system in which department heads and division managers must recommend at least one to two female candidates on their list to succeed them.

(This article was written by Mana Takahashi and Ayumi Shintaku.)