Service held for victims of 2016 mass killings at disabled facility 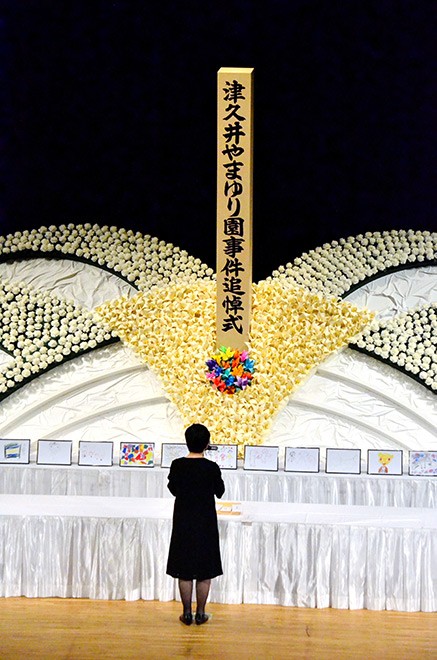 SAGAMIHARA, Kanagawa Prefecture--A memorial service was held here on July 22 for the victims ahead of the third anniversary of a mass killing at the Tsukui Yamayurien institution for the disabled.

The ceremony was hosted by the Kanagawa prefectural government and other entities at Sagami Women’s University. About 680 people, including bereaved family members of the slain infirm residents, attended.

“The residential building filled with memories was removed completely. Nothing is there,” said Kazuma Otsuki, the chairman of Tsukui Yamayurien’s family group.

He reported that reconstruction of the building is under way.

“Please watch over us warmly,” said Kaoru Irikura, the chief of the institution. “We will send a message that human life is more precious than the Earth through our daily work.”

The stabbing spree occurred in the early morning of July 26, 2016, claiming the lives of 19 residents of the institution and injuring 27 others, including three workers.

Satoshi Uematsu, 29, a former employee of the institution, was indicted of murder and other charges and is awaiting trial.

'I STABBED THOSE WHO DIDN'T RESPOND'

In an interview with The Asahi Shimbun at the Yokohama detention branch on July 18, a week ahead of the third anniversary, Uematsu remained unrepentant.

“I said to them, ‘Good morning’ and I stabbed those who didn’t respond,” he said.

According to investigative sources, Uematsu said during the police investigation, “The disabled make people around them unhappy.”

He repeated a similar remark during the Asahi interview. Uematsu did not change his stance of looking down on the disabled, saying that people who are not capable of communicating should be euthanized.

Uematsu had short blond hair at the time of the attack, but his hair now is black and long enough to be tied at the back. He bowed politely when he met the reporter in the detention house and sat in a chair. He said that he passed the time in recent days by reading books, writing letters and listening to the news on the radio.

According to the indictment, Uematsu broke into the institution around 2 a.m. on July 26, 2016, and tied up the staff members. He then killed 19 severely disabled residents by stabbing them in the neck or other parts of their bodies and injured 27 others.

In the interview, Uematsu said that he had "planned out the attack three or four months ahead of time.”

The first hearing in Uematsu’s trial, which will be under the lay judge system, is scheduled to start on Jan. 8, 2020. A verdict is expected to be given by the end of March that year.

Uematsu is expected to continue to express his unchanged views during the proceedings.