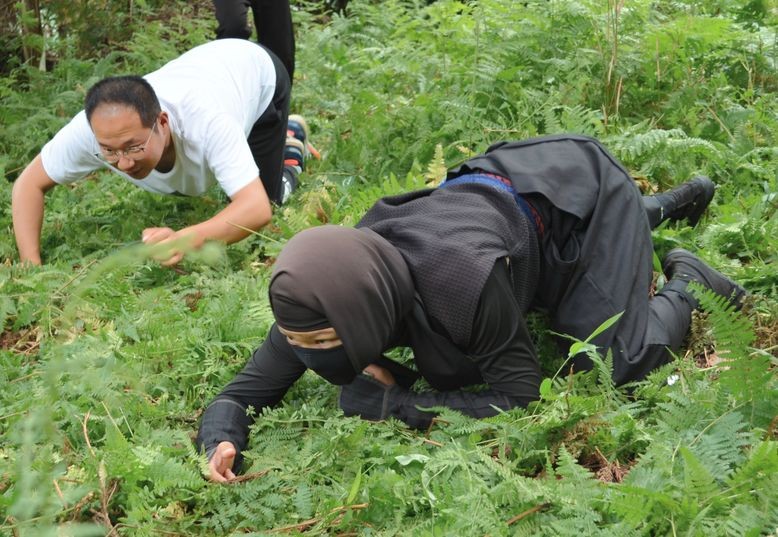 Students creep along the grass in the mountains in Iga, Mie Prefecture, on June 21. (Naoyuki Mori)

IGA, Mie Prefecture--In the mountains here, six stealthy figures creep along the grass on all fours and scale cliffs on ropes.

Takamasa Fukushima, 34, is one of the six, a ninja wannabe in a class learning about the fabled art.

Fukushima quit his information technology company in Tokyo and travels to Mie Prefecture from Saitama Prefecture almost every week.

“I took the ninja practice class in the mountains for the first time, and I’m very much impressed and want to do more,” he said after the second class on June 21.

The six Mie University graduate students are taking a course on the secrets of the feudal-era covert agents.

They are enrolled in the class called “Special Lectures on Ninja Study with Actual Practice.”

Jinichi Kawakami, 69, who resides in Fukui Prefecture, is a ninja scholar and an industry-academia-government collaboration adviser at the Iga Regional Satellite Campus of Mie University.

He is an instructor of the class in charge of ninja practice. Kawakami teaches the graduate students how to move like a ninja and other techniques of the art.

In the first class held in May, the students made three kinds of “ninja foods,” including a preserved dumpling-like food.

For the second class, the students gathered at a dojo, a martial arts gym, which Genichi Mitsuhashi, one of the students, manages. Mitsuhashi, 44, moved to Iga from Hirakata, Osaka Prefecture, in the spring last year and opened the ninja dojo in November.

Along with tending to his nearby vegetable and rice crops, he studies about ninja in the graduate school and teaches ninjutsu, ninja martial arts, at his dojo.

The students proceeded to the mountains from the dojo in the morning, and first learned the proper breathing techniques.

"Imagine. Breathe in from the entire body,” Kawakami told them.

They repeated the breathing exercise. Next, they practiced walking in a crouch to avoid being spotted by enemies in the mountains. After that, they crept along in the grass.

Around noon, they ate a “ninja lunch box,” which included the preserved foods. In the afternoon they took to practicing defensive techniques and lowering themselves down small cliffs on ropes in the mountains.

“I was able to understand very well the ninjutsu 'born in nature' by learning in the mountains," he said.

A 31-year-old Chinese student came to Japan after reading the ninja manga “Naruto” in China.

“I was really tired, but I enjoyed experiencing the ninja practice,” he said smiling.

Yuji Yamada, 52, a professor in the Faculty of Humanities of Mie University, is in charge of giving lectures in the class.

“I realized again that the ninjutsu world is amazingly wide and deep,” Yamada said.

Kawakami said, “All the students are so passionate and better at it than I expected. I want to raise the level of ninjutsu practice close to the level of actual ninja in history in the third class.”

The third class was also held in the mountains in Iga on July 12. Students were first trained to raise their hands in the air in front of trees and try to read the "signs" emanating in the air.

The next lesson was to crawl along on two arms and two legs through the forests again and again. The students had difficulty doing it at the beginning, but later improved with practice.

It is an effective maneuver to prevent being spotted by enemies because they can move swiftly from the low position.

“Imagine animals like a dog, a cat or a monkey,” Kawakami said. “It is important to train daily, so please practice even in your room at home.”