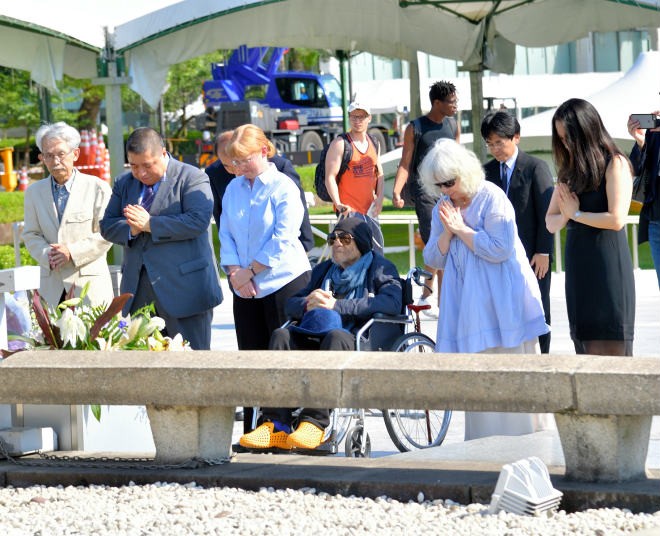 Filmmaker Nobuhiko Obayashi, fourth from left, and author Masaru Sato, second from left, offer flowers and prayers at the cenotaph dedicated to the atomic bomb victims of Hiroshima on July 26 at the Memorial Peace Park in the city’s Naka Ward. (Ichiro Matsuo)

The latest work by the octogenarian filmmaker, who was born in Onomichi, Hiroshima Prefecture, is themed on war and the atomic bombing of Hiroshima.

“It triggered my hunger for knowledge on the reality of nuclear weapons,” Obayashi said after visiting the Hiroshima Peace Memorial Museum located in the park.

Obayashi, who has been battling terminal cancer, rose up from his wheelchair with a helper’s assistance and joined his hands in prayer in front of a museum display of personal effects of atomic bomb victims.

“Let’s stop the use of nuclear weapons. We have no other option,” Obayashi told reporters.

Obayashi made the visit ahead of his attendance at this International Symposium for Peace, “The Road to Nuclear Weapons Abolition,” which got under way in Hiroshima on July 27.

The symposium is hosted by The Asahi Shimbun, Hiroshima City and the Hiroshima Peace Culture Foundation.

Other participants include author and former Foreign Ministry official Masaru Sato and Bonnie Docherty, a lecturer at the International Human Rights Clinic at Harvard Law School. They accompanied Obayashi on his visit to the park.

They offered flowers and prayers at the cenotaph for atomic bomb victims.

Coverage of the international symposium will be published July 28 at http://www.asahi.com/ajw/