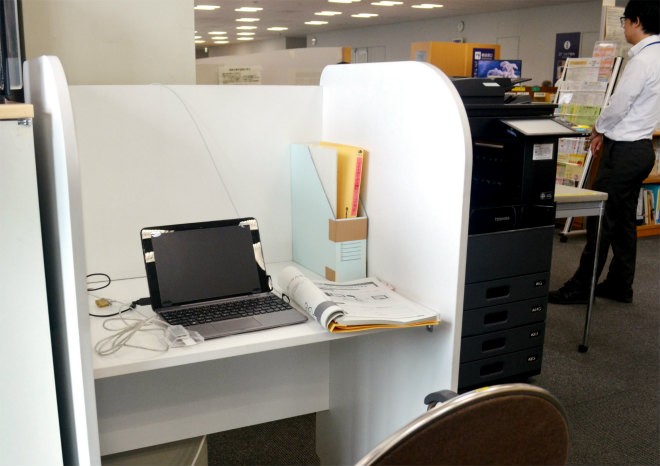 A personal computer is available at the office of the Chiyoda ward government in Tokyo for residents who do not have PCs or smartphones and need to use the Mynaportal website. (Asahi Shimbun file photo)

The central government spent more than 10 billion yen ($92 million) to create and operate its server for a website related to the My Number individual identification system in the six years through fiscal 2018, yet it is rarely used.

The number of hits on the Mynaportal website is only 0.02 percent of anticipated demand. The website allows users to see how their personal information is used.

As the contract term for the server is scheduled to expire at the end of this fiscal year, the government is moving to introduce a new system to reduce its outlays from fiscal 2020.

As of April this year, My Number card holders stood at 16.57 million, or 13 percent of the population. If those card holders log onto the Mynaportal website, they can receive three services stipulated under the My Number Law.

One allows users to check which administrative organizations keep track of their personal information and for what purposes. Another allows users to confirm their income and payments of premiums for social insurance programs. The other service offers notifications on taxes and preventive inoculations.

The Mynaportal website was created in response to fears that the My Number system could be illegally used by people pretending to be card holders.

According to documents obtained by The Asahi Shimbun and explanations provided by the Cabinet Office, the government estimated that 87 million people hold My Number cards and some would access the services once a month.

In light of that, the government assumed that the total number of usage cases for the three services would hover at nearly 20.25 million per month at most.

The server was designed to process all of those cases. The government also funded maintenance costs to secure security of the server.

However, the total number of usage cases of the three services between July 2017, when the services started, and May of this year came to only about 110,000. That works out to an average of 4,985 hits per month, or 0.02 percent of assumed demand.

Even in a best-case scenario of picking the largest number of usage cases per month for each service and combining the figures of all three, the usage rate came to a meager 0.08 percent.

A new system will be in place from fiscal 2020, the Cabinet Office said.

Maintenance costs for the current system are based on the assumed number of total users. Thus, the government outlay is significant even though the service is not used very much.

The new system will center on a server, called “cloud,” which processes data on the Internet. Costs will be decided based on actual numbers of usage cases, which will allow the government to reduce its expenditures if the actual number of usage cases is small.

A Cabinet Office official acknowledged that the My Number card system did not take off as initially envisaged.

The official noted that setting up the Mynaportal website was the first attempt.

"Unfortunately, the number of users never approached the figure we thought it would," the official said.

Lawyer Masaki Hoshino, a former high-ranking official of the Board of Audit, chided the government for not doing its homework when it set up the system.

Noting that the number of usage cases falls far short of expected demand, he said, “I cannot think that the government strictly examined the necessities of the three services and their cost-effectiveness."

Hoshino said independent checks by third parties would be necessary to determine whether funds were recklessly spent on the project.

(This article was written by Eiji Zakoda and Yoshihiro Sakai.)