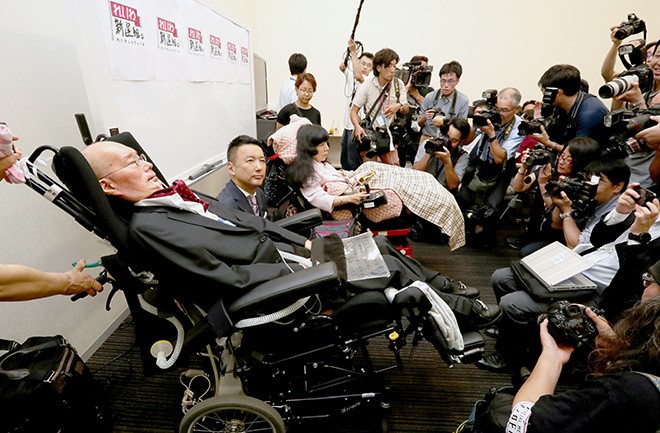 Ravaged by a degenerative muscle disease that robbed him of almost all movement, Yasuhiko Funago felt he had nothing left to offer to society.

All that changed when he was asked to help patients with the same disease that afflicts him, and this led to him capturing a seat in the Upper House election on July 21.

On Aug. 1, Funago, 61, joined 123 other newly elected members of the chamber to make their first appearance in the Diet.

Another rookie member is Eiko Kimura, 54, who is paralyzed from the neck down. They are both members of the Reiwa Shinsengumi party.

Their Diet debut followed work to make the Upper House chamber barrier-free for lawmakers with disabilities.

Funago was diagnosed with amyotrophic lateral sclerosis (ALS) when he was 42. The degenerative disease of the nerve cells leads to muscle weakness and atrophy.

He now requires around-the-clock care and has helpers read out statements that he inputs by gazing at a panel containing characters and words.

On Aug. 1, a helper read out a statement as Funago sat immobile in a wheelchair in front of the Diet building.

"I want to work to respond to the expectations held by the public," the statement said.

Just days after he was diagnosed with ALS, Funago quit his job at a trading company.

In 2002, he lost the use of his voice after an artificial respirator was inserted into his throat. He also is unable to taste food because nutrients are delivered straight to his stomach via a feeding tube.

Funago felt his poor health precluded him from making any future contribution to society.

A turning point came when his doctor suggested he provide advice and encouragement to others who developed serious illnesses like ALS.

Having faced up to the prospect of an early death, Funago felt he could help others who may also be overwhelmed by the situation they face. Through his interaction with other patients, Funago was invited to lecture on the problems that patients with ALS face.

Misako Sazuka, 57, a nurse and operator of a company in Chiba Prefecture providing care services for patients in their homes, heard about Funago's activities. In 2012, Sazuka asked Funago if he was interested in working for her company.

He recalled that he never thought he would ever be able to return to work, so he took up the offer and was made vice president. He is tasked with management duties and explaining problems from a patient's perspective.

Sazuka will continue to assist Funago as he embarks on his Diet career. One issue will be allowing an exception for Funago when he wants to ask questions because of the time needed to make himself understood using a device that he controls with a sensor held in his mouth or with the use of his eyes.

But serving as a lawmaker will not be the only way Funago spends his time.

He plans to continue his monthly practice sessions with his band. During senior high school, Funago was a fan of The Rolling Stones and he took up the electric guitar, which he still "plays" using a special device developed by students at Shonan Institute of Technology. Moving his facial muscles while wearing specially designed sensors allows Funago to make music on the guitar.

By his bedside is a drawing of a grandchild. When Funago was asked what his family thought of him serving in the corridors of political power, he used the panel he controlled with his eyes to output that his daughter told him, "Do your best while strongly holding on to your will."