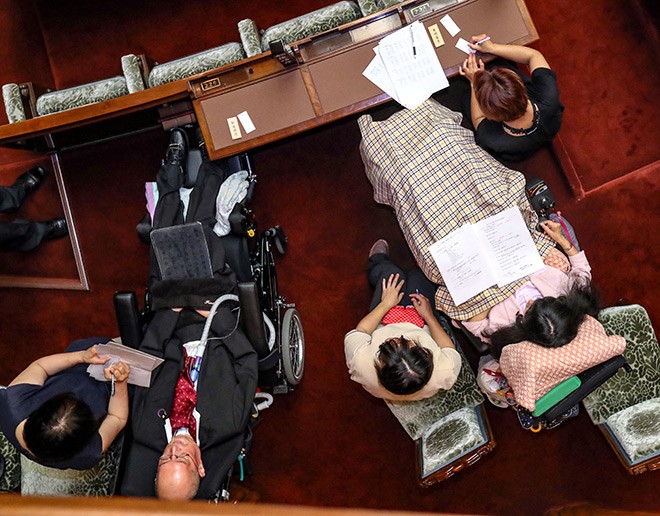 Upper House member Eiko Kimura, right, and Yasuhiko Funago attend the opening of the Diet session on Aug. 1 with the assistance of their respective helpers. (Takeshi Iwashita)

The presence in the Upper House of rookie members with severe disabilities should provide fresh and powerful impetus to moves toward the political goal of building a society where everybody can live comfortably.

Three newly elected Upper House members--Yasuhiko Funago, 61, and Eiko Kimura, 54, of the new Reiwa Shinsengumi party, and Takanori Yokosawa, 47, of the Democratic Party for the People, who was elected from Iwate Prefecture as a unified opposition candidate--made their Diet debut on Aug 1. They won their seats in the July 21 election.

The three entered the Diet building in wheelchairs via a hastily installed ramp at the main entrance.

Both Funago and Kimura were aided by helpers as they entered the Upper House. The helpers also filled in ballots on behalf of the two disabled legislators in voting to elect a new president and vice president of the chamber. The ballots were cast by Upper House clerks on their behalf.

The measures that have been introduced to enable them to do their jobs as Upper House members represent a significant first step toward a “barrier-free Diet.”

Funago, who has amyotrophic lateral sclerosis (ALS), also known as Lou Gehrig’s disease, is unable to move his limbs or speak. He communicates by moving his eyes and mouth and by gazing at a panel containing characters and words.

Kimura can speak but is paralyzed from the neck down due to a fall she suffered when she was eight months old.

During the election campaign, Kimura spoke for many people with disabilities when she called for “rights and guarantees” that ensure that the disabled can lead “normal lives with a sense of security as ordinary community members.”

Three years have passed since the law to eliminate discrimination against disabled people took effect. The law is designed to realize a society where mutual respect is taken for granted and nobody faces discrimination for any reason.

The election of lawmakers with severe disabilities has finally prodded the Diet into belated efforts to provide barrier-free accessibility to disabled members.

Moving beyond the renovation work to enable them to perform their tasks, the Diet as a whole should make a determined effort to understand the special needs of people with disabilities and tackle related challenges.

Funago and Kimura have been using mostly tax-financed home-visit nursing care services for severely disabled people. Under the current setup for such services by employed people, the cost must be borne by the users themselves or by their employers.

As a step to spare these lawmakers the financial burden, the Upper House has agreed to bear the costs of care they need within the Diet.

This is an understandable measure as an immediate response to the situation. But the rules in question have been criticized as an impediment to social participation by the disabled. The two new legislators have called for the rules to be changed to allow disabled employees to receive publicly financed care services. The Diet should take this opportunity to consider a radical review of the system.

There are also issues concerning formal procedures for deliberations at the Diet.

Three years ago, the Lower House Committee on Health, Labor and Welfare was harshly criticized after canceling scheduled testimony by an ALS patient on grounds it would take too long to communicate with the individual.

When Funago attends a committee session, for instance, he will undoubtedly need more time than other members without disabilities to engage in meaningful discussions.

The Diet should take a flexible stance in handling this issue, putting priority on making good use of the experience and knowledge of a disabled person who has faced difficulties and discrimination.

Politics should be open to participation by all people, whether they are disabled or not.