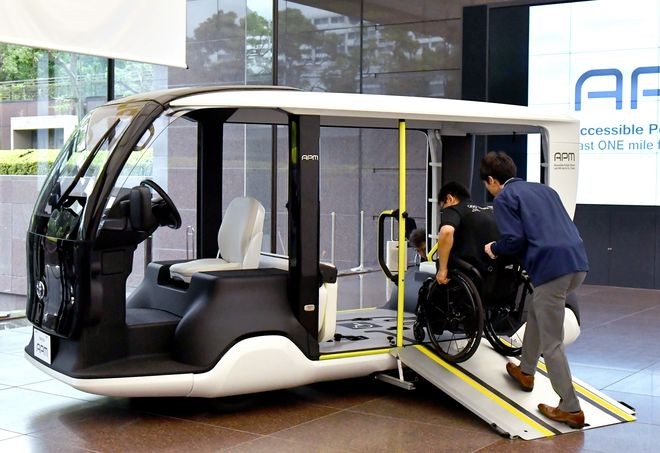 The Accessible People Mover, which Toyota Motor Corp. developed to use at the 2020 Tokyo Games, is unveiled on July 18 in Tokyo’s Bunkyo Ward. (Satoru Semba)

Toyota Motor Corp. has developed an electric vehicle designed to transport the elderly and disabled during the 2020 Tokyo Olympic and Paralympic Games.

The automaker unveiled the new vehicle named APM (accessible people mover) on July 18, which has ramps stowed under its floor to provide easy access for passengers in wheelchairs.

Looking similar to a golf cart, the mover has no doors to slash the time of getting in or out of it.

Instead, it has curtains to protect passengers from getting soaked in the event of rain.

The APM carries a maximum of six people and has a top speed of 19 kph, according to the automaker.

It can run for about 100 kilometers powered by a lithium-ion battery under its body that takes between five to 15 hours to charge.

Toyota is expected to provide about 200 APM vehicles for the Games to transport athletes, elderly people and people with disabilities for the “last one mile,” an area connecting venue entrances to the nearest gate of spectator stands.

Toyota will also provide a type of vehicle equipped with a stretcher, which can be used for rescue activities.

Toyota is expected to provide more than 3,000 official vehicles, including the newly unveiled APM, for the Tokyo Games.

The company hopes to use as many fuel-cell vehicles as possible at the event such as its Mirai model.