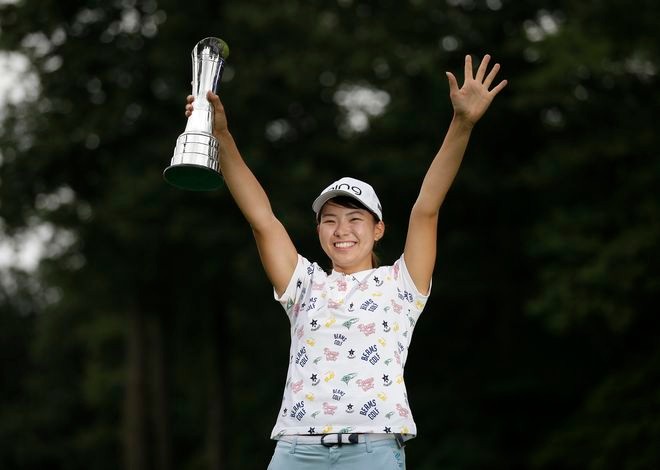 Japan's Hinako Shibuno reacts as she holds the trophy as she celebrates after winning the Women's British Open golf championship at Woburn Gold Club near near Milton Keynes, England, on Aug. 4. (AP Photo)

MILTON KEYNES, England--Hinako Shibuno of Japan won the Women's British Open on Sunday in her major championship debut, holing an 18-foot birdie putt on the final hole for a one-stroke victory over Lizette Salas.

The 20-year-old Shibuno, a rookie on the Japan LPGA Tour who was making her LPGA Tour debut, birdied five of the final nine holes for a 4-under 68 and an 18-under 270 total at Woburn Golf Club.

Largely unknown before the championship, Shibuno--nicknamed "Smiling Cinderella"--started the round with a two-stroke lead, but lost it with a double bogey on the par-4 third. She birdied Nos. 5 and 7 before a bogey on the eighth.

Salas finished with a 65.

Jin Young Ko, who was seeking her third major title of the year after winning the Evian Championship last week in France, was two shots back after a bogey-free 66. Morgan Pressel (67) was fourth at 15 under.