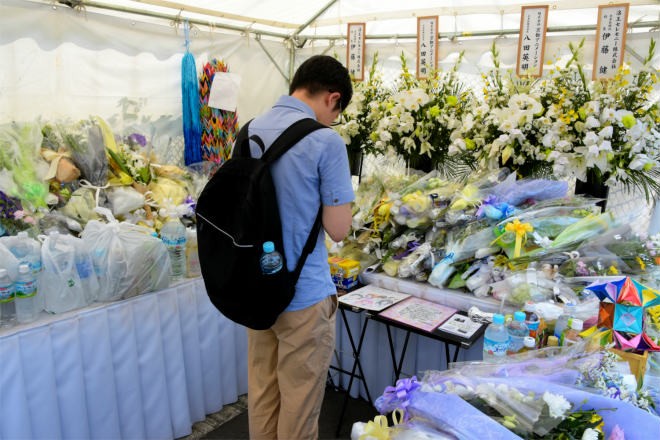 Cho Chi-hyeong, a fan of the anime series “Haruhi Suzumiya,” visits a memorial tent near the No. 1 studio of Kyoto Animation Co. in Kyoto's Fushimi Ward on Aug. 3. (Yusuke Noda)

KYOTO--South Korean anime fans are visiting the three-story ruins of Kyoto Animation Co. here to pray for the victims of an arson attack last month that claimed 35 lives, including famed directors.

"A horrific incident happened here, and it deeply saddens me," said Cho Chi-hyeong, 31, an IT company employee who was born in Seoul and lives in Osaka's Higashinari Ward.

The tributes by fans from South Korea following the July 18 incident--the deadliest massacre in Japan in at least three decades in terms of the death toll--come at a time when ties are deteriorating between Seoul and Tokyo owing to trade rifts, among other issues.

Cho moved to Japan in March this year for work after developing a fondness for the "Haruhi Suzumiya" anime series created by Kyoto Animation. He quietly expressed his condolences to the victims at a tent set up for receiving flowers in the city's Fushimi Ward on Aug. 3.

"The work captures the feeling of youth in an authentic way, and the images are beautiful," Cho said. "It has a unique atmosphere that distinguishes it from other anime works."

Cho visited the ancient capital from South Korea in 2015 and 2017 to attend biennial fan events organized by the prominent animation studio.

The 2017 installment featured Yasuhiro Takemoto, the director of “Haruhi Suzumiya” and “Lucky Star,” who was among those killed in the attack, prefectural police announced Aug. 2.

Recalling Takemoto, who died at the age of 47, speaking at the event, Cho said, "Hearing him speak so calmly, I could sense his sincerity."

A number of foreign nationals, many from China but also from South Korea, have visited the memorial site since the arson attack.

Despite the increased political tensions between Japan and South Korea, these visitors made comments such as, "I love Japanese anime," and "I like Japan."

Many of them initially came to be fond of Japan because they are fans of works created by Kyoto Animation, according to the mourners.

Im Wi-gyeon, 27, who was visiting Japan from Seoul, was looking up at the burned-out No. 1 studio of Kyoto Animation on the evening of July 29.

"(The studio's works) are what made me come to like Japan. It's heart-wrenching," he said.

Originally, Im did not have such a fondness for Japan, saying that "in the schools I attended or society there was an (anti-Japan) atmosphere." However, his attitude changed after watching “The Melancholy of Haruhi Suzumiya” as a junior high school student.

He became caught up in the careful animation and production and was touched by the work. It also became popular among his friends.

"Most of my classmates watched the anime," Im said.

His interest in Japanese anime prompted him to learn Japanese on his own, leading to friendships over the Internet with Japanese who also loved anime, he said.

Im also traveled to Japan to participate in a cosplay event held in the Odaiba district in Tokyo's Minato Ward dressed as one of the characters from “The Melancholy of Haruhi Suzumiya.”

"Kyoto Animation was my guide to Japanese culture. The work was part of my youth," he said.

Bilateral relations between Seoul and Tokyo have become increasingly strained in recent days partly owing to Tokyo's restriction of exports to the neighboring country.

"There is a wide variety of opinions in South Korea (over such matters)," Im said. "But Kyoto Animation has helped establish a bond that transcends boundaries and nationalities. Japanese culture will continue to be part of who I am."

Ryutaro Iso, 20, a liberal arts student at the University of Tokyo, was studying in South Korea when the arson attack occurred and met several South Koreans who said they were fans of Kyoto Animation.

Iso, who lives in Yachiyo, Chiba Prefecture, said all of them were deeply saddened over the tremendous loss of life and talent.

While visiting the memorial on July 31, Iso noted that he wished to work in anime production in the future.

"If bilateral relations become worse, cultural ties will become even stronger," he said.

(This article was written by Yusuke Noda, Shinichiro Bando and Takuya Yamazaki.)