Lisa’s In and Around Tokyo: Train and Bus Museum is tons of fun for kids and kids at heart 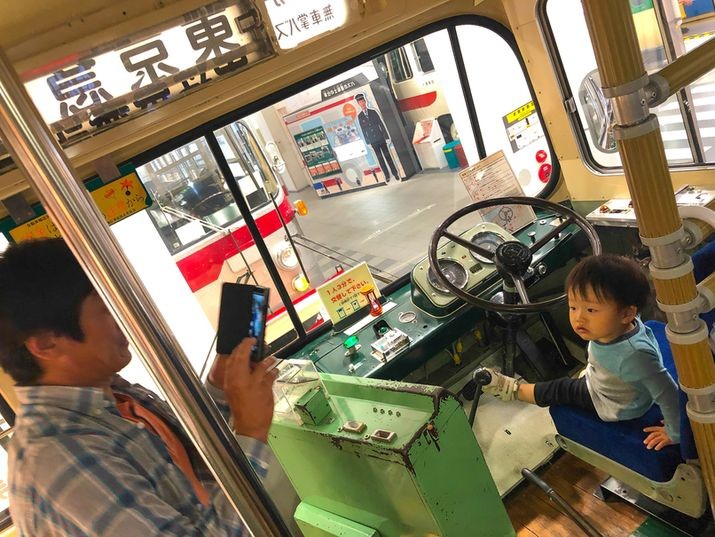 A father takes a picture of his son sitting in a bus driver’s seat at the Train and Bus Museum. It offers plenty of hands-on activities for children and train enthusiasts. (Photo by Lisa Vogt)

As a little girl, whenever I was asked, “What do you want to be when you grow up?” I would proudly answer, “a bus driver!”

I used to drag a round piano stool to the center of the living room and sit on the floor. With both arms raised to shoulder level in front of me, I’d spread my arms and grip the edge of the dark brownish-red velvet cushioning.

Seeing the tassels swing left and right was exhilarating! I would see streets and bus stops in my mind’s eye and rotate the seat--I mean, the steering wheel.

The only problem was, after several minutes, the screw stool would invariably get too high or too low, and my bubble would pop, and it was back to reality. Oh, those were the days!

The Train and Bus Museum is connected to Miyazakidai Station on Tokyu’s Denentoshi Line and a 20- to 30-minute train ride from Shibuya. I was greeted by Norurun, the Tokyu Line’s mascot with a pantograph on its head and a red horizontal line on its body, just like Tokyu’s trains.

Inside the museum are real trains and buses from various eras. It was a walk down memory lane seeing the interior of trains with wood-paneled walls and windowpanes.

I felt a bit embarrassed after I impulsively squealed in delight upon seeing a wooden pole in the middle of the car (for passengers to hold) and a vintage brass brake handle. I could almost hear the creak, squeak and crackle sounds of the wood and the clickety-clack of the wheels on the railroad tracks. I wonder how many readers of this column can relate to these nostalgic sounds.

For children and children at heart, there are many interactive exhibits. Not only can you explore inside and outside real train cars and buses, you can also try your hand at driving simulators, study cutaway views of engines and undercarriages, operate models and learn about the people who make bus and train systems work.

The Plarail corner, where visitors can connect miniature rails and add scenery pieces to create a diorama, is very popular. The museum limits usage to 30-minute increments when things get a little crowded.

Had I visited such a museum as a child, I would have had a much more realistic image of being a driver, and my life today might have turned out differently. I wonder if there’s an age limit to getting a bus driver’s license.

It’s a fun outing for everyone--whether you’re a kid or adult, train buff or bus geek.

This article by Lisa Vogt, a Washington-born and Tokyo-based photographer, originally appeared in the July 7 issue of Asahi Weekly. It is part of the series "Lisa’s In and Around Tokyo," which depicts the capital and its surroundings through the perspective of the author, a professor at Meiji University.