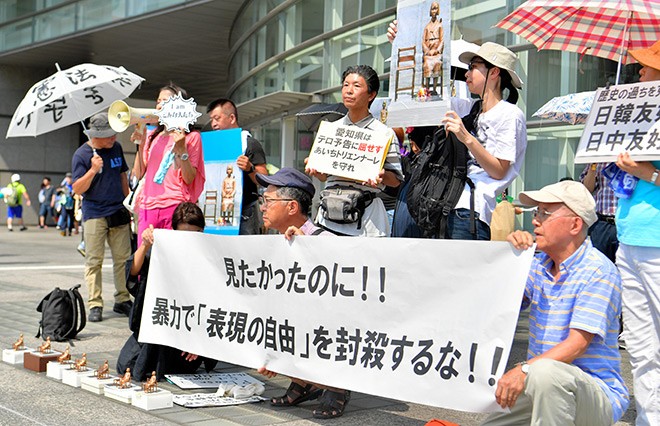 People protest the cancellation of the “After ‘Freedom of Expression?’” exhibition outside the Aichi Arts Center in Nagoya on Aug. 4. (The Asahi Shimbun)

The freedom of expression, the foundation of exchanges of views and opinions among people for building a better society, has been badly damaged by the recent cancellation of a controversial art exhibition.

The art exhibition, titled “After ‘Freedom of Expression?' ” and held as part of Aichi Triennale 2019: Taming Y/Our Passion, was canceled only three days after opening as it drew a storm of protests and threats over the works it featured.

The exhibition was designed to inspire audiences to deepen their thoughts about acts of expression by assembling pieces that have been previously removed from public view.

While it was not intended to lend support to artworks on display, a statue of a girl symbolizing "comfort women" and a video in which portraits, including one of Emperor Showa, go up in a burst of flames, among others, became targets of fierce protests.

There was even a threat of arson. Such threats constitute crimes. Police should recognize the seriousness of what occurred and make full-scale investigations.

In recent years, there have been a wave of attacks against certain arguments and works that are sometimes directed not only at the authors and creators themselves but also at other parties concerned. These attacks are aimed at quashing the arguments and views the attackers dislike.

This time, blatant interventions by politicians have made things even worse.

Nagoya Mayor Takashi Kawamura, who serves as acting chairman of the organizing committee of the art festival in Aichi Prefecture, demanded the exhibition to be canceled and an apology from the organizers.

Kawamura, disturbed by the comfort woman statue, said the exhibition “tramples on the hearts of the Japanese people.”

The mayor abused his power by judging the value of the artwork based on his own views and putting pressure for its removal from public view.

His act reflects a lack of understanding about the meaning of the constitutional guarantee of the freedom of expression and cannot be justified by any means.

Chief Cabinet Secretary Yoshihide Suga and education minister Masahiko Shibayama have suggested that the government may review state subsidies to the art exhibition.

The common factor behind all these remarks is the notion that publicly subsidized events using public facilities should not express views and opinions that are not in line with those of the government.

But this is clearly wrong thinking. People who are critical of the current political and social environment also pay taxes.

Taxpayer money should be used to meet the diverse needs of the people, including critics of the government, in developing and managing social foundations.

This point is all the more relevant for debate on the cancellation of the exhibition because it involved artistic works that cannot be judged or evaluated through a majority vote.

The government should leave it up to the artistic director to make decisions while making utmost efforts to protect diversity.

The remarks of the mayor and some government officials run counter to this imperative, stifle free expression and sap the vigor of society.

The organizers of the exhibition should also do some soul-searching. Were they sufficiently prepared to deal with highly predictable protests? Weren’t there serious flaws with the process of deciding to cancel the exhibition and the explanation about it to the people involved?

The organizers should do a proper post-mortem on what occurred to learn needed lessons for the future.

The chain of events concerning the exhibition has provided graphic evidence of the stifling atmosphere in society that is threatening freedom of expression.

To prevent a recurrence, it is crucial for us to confront the social ills and voice objections to any move to undermine the freedom of expression.