VOX POPULI: Supercomputer that made Japan proud led a most eventful ‘life’ 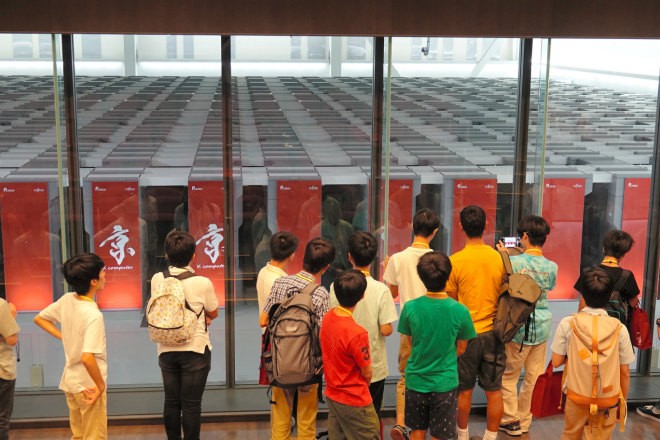 Visitors view the K supercomputer at the Riken Center for Computational Science in Kobe on Aug. 1. The operations of the supercomputer ends on Aug. 16. (Seiji Tanaka)

There are 864 workers of the same body shape--everyone standing a bit over 2 meters tall and very sensitive to heat--toiling away to crunch numbers without a single word of complaint.

That's my anthropomorphized version of Japan's K (or Kei, which stands for 10 quadrillion in Japanese) supercomputer.

Hearing of K's scheduled retirement this summer, I visited its home at the Riken Center for Computational Science in Kobe, Hyogo Prefecture.

"K has amply revealed to us researchers a vista we had never seen before," said a thankful Riken adviser, Kimihiko Hirao, 73.

Unlike supercomputers in other countries that are usually put to military applications, K was used strictly for civilian research.

Over the last eight and a half years in service, K has predicted the movement of clouds at specific locations at specific hours and helped improve the precision of cardiac surgery procedures, among other things.

K can complete in just one second what would take 17 days if the entire global population were mobilized to work with calculators, non-stop.

For its phenomenal computing speed, K was twice ranked as the world's fastest computer.

"To use a track and field analogy, K was a superb, all-around athlete who excelled as a sprinter, high jumper and long jumper," said Hirao.

But there also were times of adversity.

While K was still in development in 2009, the project's budget was partially frozen by the then-ruling Democratic Party of Japan that was looking to trim spending on "less urgent" programs.

K's chances of becoming No. 1 in the world were dashed by a DPJ lawmaker who famously said, "What's wrong with being No. 2?"

However, a group of prominent Japanese scientists complained and succeeded in getting the party to rescind its decision, and the project survived.

But a new crisis struck just before K was nearing completion: The factory where K's parts were being made was damaged by the Great East Japan Earthquake of March 2011.

Some people did not want K to retire, but it was deemed unavoidable due to the prohibitive costs of cooling the supercomputer. Its state-of-the-art successor, Fugaku, is an energy-efficient, high-performance model.

K will become inaccessible to outside users on Aug. 16. It will be shut down on Aug. 30, with a ceremony held on the date to mark the occasion.

K has had a most eventful "life." I want to thank it from the depth of my heart for its years of tireless service, and wish it a happy retirement.