White smoke rises from Mount Asamayama on Aug. 8, a day after a small eruption. (Video footage by Kotaro Ebara) 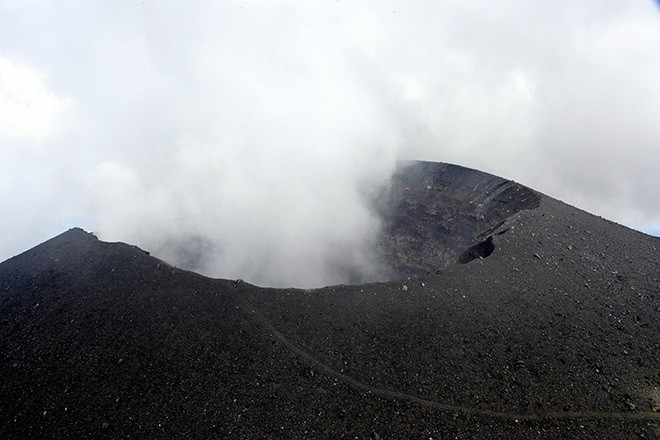 White smoke rises from Mount Asamayama on Aug. 8, a day after a small eruption. (Kotaro Ebara)

It warned of an increased risk of a pyroclastic flow and volcanic rocks being tossed about over a four-kilometer radius.

According to the JMA, the eruption caused smoke to billow more than 1,800 meters into the sky and spewed rocks 200 meters from the crater. It lasted 20 minutes.

The JMA later confirmed that ash had fallen in the town of Naganohara and the village of Tsumagoi, both in Gunma Prefecture.

It was the first volcanic activity there since June 2015.

White smoke rising through clouds was confirmed by an Asahi Shimbun helicopter on Aug. 8.

It was not able to confirm whether greenery on the slope was covered in ash.

"It was apparently a small eruption," said Takayuki Kaneko, an assistant professor at the University of Tokyo’s Earthquake Research Institute, who was in the helicopter.