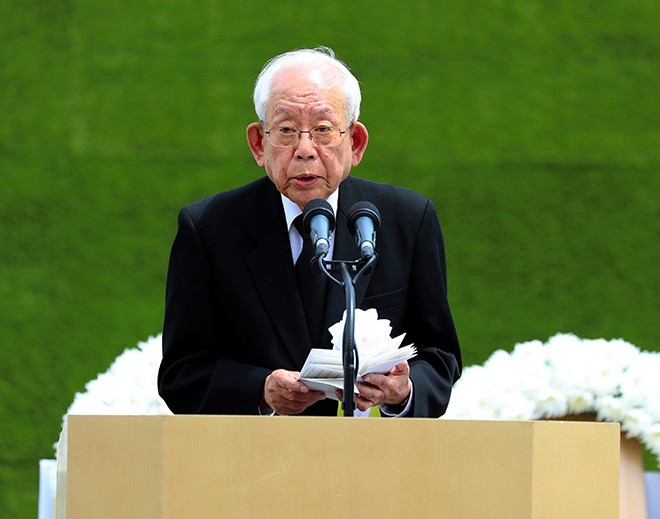 Yoshiro Yamawaki represents hibakusha to deliver a speech on Aug. 9 marking the 74th anniversary of the dropping of the atomic bomb on Nagasaki. (Mahito Kaai)

NAGASAKI--Seventy-four years ago on Aug. 9, 1945, 11-year-old Yoshiro Yamawaki was at home preparing lunch when the atomic bomb was dropped about 2.2 kilometers away.

He survived the blast but suffered health consequences over the years from his exposure to radiation.

Later, Yamawaki would begin studying English in earnest because he wanted to connect with a wider audience about his experiences in the atomic bombing of Nagasaki.

Today, Yamawaki, 85, has been speaking to audiences for nearly 25 years. He was the hibakusha representative on Aug. 9 at the peace ceremony at Nagasaki Peace Park to mark the 74th anniversary of the atomic bombing.

In his speech, Yamawaki expressed frustration over the lack of action in freeing the world of nuclear weapons.

With Prime Minister Shinzo Abe in attendance, Yamawaki urged action toward eliminating nuclear weapons "while hibakusha are still alive. I believe that is the only path toward rewarding the hibakusha for what they have suffered."

With ambassadors and diplomats representing 66 nations also in attendance, Yamawaki closed his speech in English.

"Please lend us your strength to eliminate nuclear weapons from the face of the Earth and make sure that Nagasaki is the last place on Earth to suffer an atomic bombing. Thank you."

On the day of the atomic bombing, Yamawaki, who was in the sixth grade of primary school, was at home along with his twin brother.

His mother and four other siblings had left for a relative's home in neighboring Saga Prefecture the previous day.

His older brother also became a hibakusha because he was away from home when the atomic bomb detonated at 11:02 a.m.

Their father was working at a plant only 500 meters from ground zero and died from the blast.

But the brothers would be forever scarred when they went to gather his remains after cremation. When Yamawaki's older brother touched their father's skull with metal chopsticks, it fell apart like plaster. What looked like the half-baked remains of his father's brain leaked out, causing his older brother to scream, drop the chopsticks and flee from the site.

Yamawaki said he followed his older brother in fleeing.

"That was how we ended up abandoning our father's remains," Yamawaki recalled.

He never talked about the remorse he felt at that time to his mother, who died 14 years ago at age 97.

DIDN'T WANT TO SPEAK AS A HIBAKUSHA

When he retired at 60 from an electrical equipment manufacturer, Yamawaki was asked to speak about his hibakusha experience.

At first he refused.

"I thought it was unthinkable to bring hibakusha out in front of an audience," Yamawaki said. "I did not want to recall what I experienced and never wanted to talk about it in front of others."

But as he observed other hibakusha talk about their experiences, Yamawaki realized how seriously children listened.

That led Yamawaki to change his mind and begin feeling that talking about his experiences might contribute to ridding the world of nuclear weapons.

He first talked in front of an audience in 1995. After about five years, he also began talking to foreigners through an interpreter. But he became frustrated, not only at the mistakes made in interpretation, but also at the loss of time as he waited for the interpretation to end. He felt he wanted to talk directly to those foreigners to close the gap between them.

That gave him a more specific reason for putting further effort into studying English that he began one year before retirement. He listened to CDs and English language study programs on the radio while doing household chores.

He wrote the English that he intended to use and had native English speakers check it. He also began speaking drills because he felt just reading from a script would not reach his audience.

In 2010, he was part of a delegation that included the Nagasaki mayor that went to Manchester, Britain. There, Yamawaki spoke to about 130 junior and senior high school students in English. The response differed from the past.

"Even with my less than fluent English, they listened to me in a serious manner and some shed tears," Yamawaki recalled.

More recently, he has spoken to young diplomats both in Japan and abroad because he feels they will play a leading role in the future regarding any move toward disarmament.

Of the 50 or so speeches he makes every year, about 10 are now in English.

In 2015, the Pugwash Conferences on Science and World Affairs held a gathering in Nagasaki. Yamawaki spoke before about 200 scientists and other representatives from 36 nations gathered to discuss how to eliminate nuclear weapons. They gave him a standing ovation for his English speech.

Still, there are few signs of a move toward a nuclear-free world.

Last week, the Intermediate-Range Nuclear Forces Treaty negotiated between the United States and the former Soviet Union expired. Two years have passed since a U.N. conference approved the Treaty on the Prohibition of Nuclear Weapons, but Japan continues to refuse to sign the treaty.