Survivor’s plea for the world: No more Hiroshimas or Nagasakis 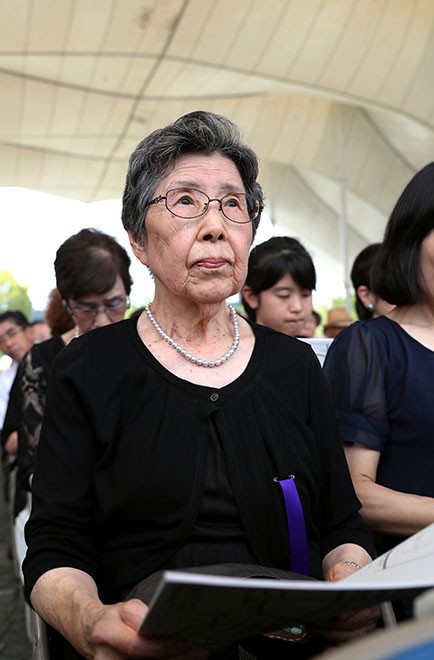 NAGASAKI--Nagasaki Mayor Tomihisa Taue began reading his Aug. 9 peace declaration with a poem by a woman who survived the city's atomic bombing 74 years ago, but lost her mother and siblings in the process.

Yamaguchi was 17 at the time and working at an office of the Ohashi weapons plant of Mitsubishi Heavy Industries Ltd. A blinding flash accompanied the detonation, leveling the building where she worked.

Yamaguchi crawled from the debris to encounter scenes of utter desolation. Fires were raging and the sky was incredibly dark. Some people's hair stood on end and others had blood streaming down their faces.

Yamaguchi was taken to a first-aid station with burns to her face and arms. There, she learned that no one else had survived in the neighborhood where her family lived. Not wanting to give up hope, she never asked about what happened to her mother and siblings.

In the poem that Taue recited, Yamaguchi wrote, "While thousands of arms and legs were torn off/ Intestines drooping out/ Maggots swarming in bodies,/ Those still breathing searched for loved ones/ And cremated the dead they found./ The smoke of burning corpses rose into the sky/ And innocent blood stained the water of Urakami River."

Yamaguchi's father died when she was little. She moved in with an aunt and was told in autumn 1945 that the remains of her 11-year-old sister had been found in the ruins of their home. The sister was at home because of her school's summer vacation. Yamaguchi's mother worked at a nearby soy sauce factory, but no trace was found of her or Yamaguchi's 14-year-old sister.

Her poem continues, "Leaving only keloid scars, the war finally came to an end./ But/ My mother and father are gone./ My brothers and sisters will never return."

Yamaguchi was unable to summon the energy to search for her mother or sisters or even look for remains. She was overcome with a sense of guilt because she alone had survived. At the same time, she felt unable to move forward with her life unless she tried to forget what had happened.

She began avoiding the area where she once lived. While she attended the memorial ceremonies held at school, she never talked with her classmates about the atomic bombing.

It took Yamaguchi about 30 years to find inner peace and reflect on the horrors she had witnessed. Soon after she married, Yamaguchi and her husband set up a small printing company, which expanded to require more employees. Her three children were all in their 20s.

At that time, she frequently browsed books written by hibakusha and photograph collections detailing the tragedy that befell Nagasaki. Yamaguchi learned of a classmate who had been incinerated while standing up. People in search of water plunged their faces into the river to quench their thirst, never to rise again. That led Yamaguchi to think about the last moments of her mother and sisters. She was adamant that the tragedy should never be repeated.

Yamaguchi was at the Nagasaki Peace Park for the ceremony on Aug. 9 when her poem was recited by Taue. She listened with closed eyes as her memories took over--of those who perished in the atomic bombing, her own existence in an era of peace and the mystery as well as apologetic feelings she harbored for having survived.

She fervently prayed that peace would continue and was convinced that her mother and sisters in heaven were mouthing the same prayer.

(This article was written by Toko Tanaka and Keiko Yasuda.)