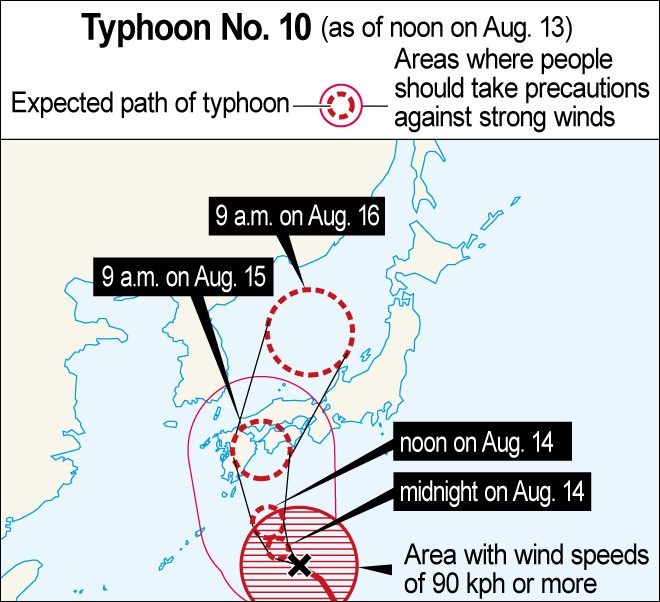 Typhoon No. 10, categorized as “very strong,” was located in the southern sea of Japan early on Aug. 13 and moving north while gathering force.

The typhoon is forecast to make landfall on Aug. 14-15 in western Japan and maintain a strong intensity and powerful winds.

The Japan Meteorological Agency warned that stormy weather and high waves are likely, as well as landslides and flooding due to rivers overflowing. The agency is calling for people in affected areas to exercise a high level of caution against such possible disasters.

As of noon on Aug. 13, the typhoon was about 500 kilometers southeast of Tanegashima island in Kagoshima Prefecture, the agency said, and moving northwest at about 20 kph.

The storm has a maximum wind speed of 162 kph and an atmospheric pressure of 965 hectopascals. Warm and wet air is expected to enter Pacific-side areas in Japan, and torrential rain is forecast in such areas from Aug. 13.

The Tokai region is expected to face 300 millimeters of rainfall during the 24-hour period through noon on Aug. 14, while 200 mm was forecast in the Kinki, Shikoku and Southern Kyushu regions and 150 mm in northern Kyushu.

During the day on Aug. 13, high-pressure systems are expected to blanket the Tokai, Kinki and Kyushu regions, producing a potentially deadly heat wave across the country.

The daytime high on the 13th is expected to be 38 degrees in Tottori Prefecture. For the Kanto-Koshin region, a day of intense summer heat is forecast, with 33 degrees likely in Tokyo as well as in Kanagawa, Saitama and Chiba prefectures.