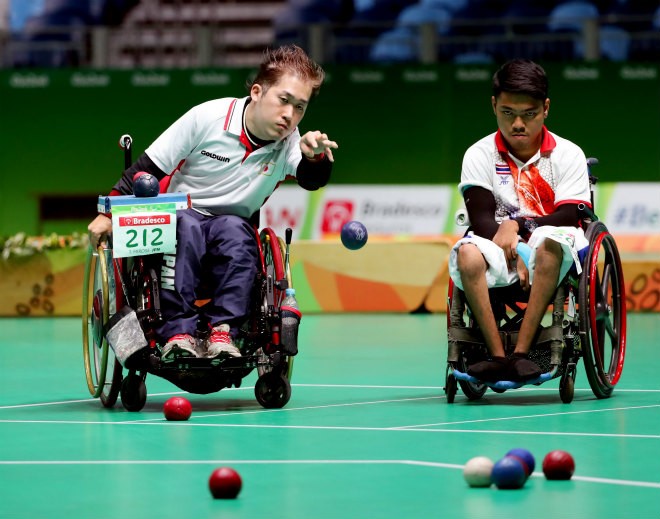 Takayuki Hirose, left, throws a ball during the final session of boccia during the Rio Paralympics in September 2016. (Asahi Shimbun file photo)

Ticket seekers for Paralympic events--including blind soccer and boccia--will have an opportunity to enter a lottery next week, the organizers of the 2020 Tokyo Games announced Aug. 13.

With this round open to residents of Japan, registration on the organizing committee's website will be open before dawn on Aug. 22 through the morning of Sept. 9, the committee said.

The results will be announced on Oct. 2.

Three types of tickets will be available: “Wheelchair” for wheelchair users and their companions; “Tokyo 2020 Group Ticket” for families or groups with one or more children aged 12 or younger, people 60 or older or individuals with disabilities; and "General Tickets" for individual spectators.

Tickets for the final swimming event as well as the bronze and final events in wheelchair basketball will be sold for 7,000 yen ($65.78), the most expensive tickets. The least expensive tickets are for five events, including canoe and goalball, priced at 900 yen.

A detailed schedule for all 22 sports was also announced.

A record high of about 4,400 athletes are expected to participate in the Paralympic events during the 13-day period.

The committee intends to realize packed venues with spectators enthusiastically cheering on athletes.

To do so, they will need not only to sell all the tickets, but also to fill all the seats with spectators.

The goal may be difficult to achieve, however, given that during the 2012 London Paralympics, there were numerous empty seats at some venues, even though a record-high 2.78 million tickets were sold.

One of the strategies the committee is taking is "ticket collaboration with schools," whereby they make the events accessible to elementary and junior high school students and special support schools for disabled children nationwide. The committee prepared a total of more than 1 million tickets for both the Olympic and Paralympic sporting events for such students.

The price for such tickets will be 2,020 yen for Olympic events and between 500 and 2,020 yen for Paralympic events. They will not be available to the general public, but rather will be promoted by the committee to prefectural governments across the country.

The Tokyo metropolitan government will cover all costs for students of private and public schools in Tokyo that wish to participate.

An official of the government's department of administration of private schools indicated that there is strong interest in the program, saying, “Up to 100,000 tickets are likely to be requested.”

One of the challenges, however, in issuing such tickets is that holders cannot choose the date or event, with some critics saying that even if a school wants to obtain tickets and distributes them, students may not be able to attend owing to other plans.

Also, the venue for cycling events in Shizuoka Prefecture is between 20 and 30 minutes by car from the nearest train station, and thus, chartered buses will be required for groups.

However, an official of a bus company in the prefecture said: "As there is an insufficient number of chartered buses, they will have to be pulled from other companies. Even if a school requests a charter bus, we cannot definitively say that one will be available."

A municipal government official in the Kyushu region said: "A person may possess a ticket, but still requires accommodation, which we will need to arrange. It's thus not convenient for them to attend an event."

Japanese representatives will participate in blind soccer for the first time during the Paralympic Games. Those involved in the sport have been making efforts to shift to charging for watching games, despite it having been a matter of course that spectators could enjoy them for free.

“There should be no problem attracting spectators for Japan team games, as they should prove to be popular," said Eigo Matsuzaki, 39, an executive of the Japan Blind Football Association. "The challenge we will likely face is events held in the early morning hours. Events will be held at such times for the purpose of avoiding the summer heat."

Matsuzaki added: "There are many people who may think, 'I lost out on the lottery for Olympics tickets. But maybe I have a chance to watch some Paralympic events.' We'd like to promote our sport to such people."