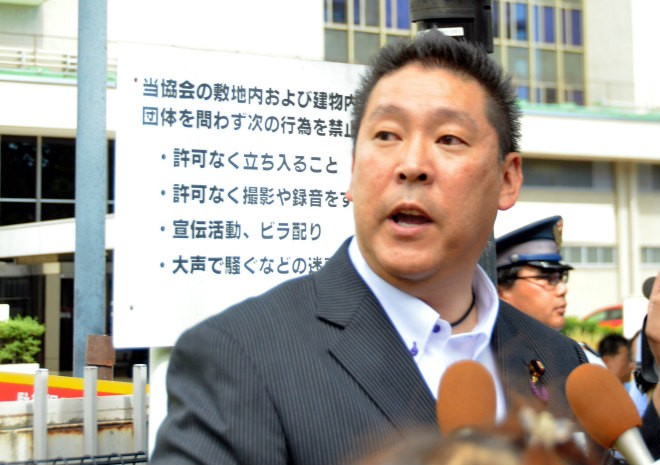 Takashi Tachibana, head of “NHK kara Kokumin o Mamoru To” (Party to protect the people from NHK), talks to reporters in front of the NHK Broadcasting Center in Tokyo’s Shibuya Ward on Aug. 8. (Keita Mano)

Although seeking to be politically neutral, Japan Broadcasting Corp. (NHK) is struggling to cover and respond to a small political party that aims to "destroy" the public broadcaster.

“NHK kara Kokumin o Mamoru To” (Party to protect the people from NHK), which won a Diet seat for the first time in July, is receiving frequent daily coverage from commercial broadcasters.

The party, called N-Koku for short, is expanding its assertion that NHK broadcasts should be scrambled so that people who do not watch the public broadcaster can avoid paying subscription fees.

As the assertion is denying the significance of public broadcasts, NHK is having difficulties in dealing with the party in its programs.

N-Koku, which garnered a seat in the proportional representation portion of the July 21 Upper House election, also collected 3.02 percent of all votes cast in prefectural constituencies, meeting conditions as a political party stipulated under the Public Offices Election Law.

NHK says on how to treat N-Koku in its programs, “We will decide based on our own editorial rights as a media organization.”

According to people related to NHK, if NHK uses its standards that have been used so far, N-Koku will be treated in the same manner as other small political parties, such as Reiwa Shinsengumi and the Social Democratic Party.

That means that N-Koku members can participate in political talk shows and will receive coverage in news programs.

However, N-Koku is calling for introduction of a measure to scramble NHK broadcasts so that only people who pay subscription fees can watch its programs. The party has made the demand since its founding in 2013 under the slogan, “Destroy NHK.”

The assertion runs counter to the significance of NHK’s existence as a public broadcaster that, by having the people shoulder the fees equally, it can convey its programs throughout the country without influence from interest groups or TV ratings.

During the official campaign period for the Upper House election, NHK also allowed N-Koku candidates to express their political views in its broadcasts as required under the law. From now on, however, it could take a cautious stance on N-Koku.

“If we broadcast (N-Koku’s assertions), people’s attention to scrambling (NHK broadcasts) could increase. As a result, we could be put in a difficult position,” said an NHK executive.

Meanwhile, N-Koku is increasingly receiving coverage by other media after the Upper House election and is intensifying its campaign against NHK.

On Aug. 8, N-Koku leader Takashi Tachibana, who formerly was an NHK employee, visited the public broadcaster. To conclude an NHK subscription contract for a TV he installed in his office in the Upper House members’ building, he submitted a “broadcast subscription contract” he had worked out on his own.

After that, he held a news conference in the building, in which he showed a recognition that the contract had been concluded. However, Tachibana said, “I will not pay the full amount of the subscription fee.”

His actions on the day were covered on commercial news broadcasts.

Before the Upper House election, N-Koku had been acquiring support through the Internet. For example, it had posted videos of its candidates expressing their political views or those of people protesting NHK staff who were collecting subscription fees on YouTube.

After the election, commercial broadcasters are covering the party not only in news programs but also in information and variety programs because it met conditions of certification as a political party.

During the period from July 22 to Aug. 5, the total broadcast time on N-Koku totaled 17 hours on 147 programs.

NHK is currently fielding opinions and inquiries on N-Koku or related issues. However, the numbers or contents are not being made public.

According to the related people, however, there are such opinions being expressed as, “It is unfair that some people are not paying subscription fees” and “Are you going to leave (N-Koku) as it is?”

In response, NHK aired a three-minute program on its General TV channel from Aug. 9 to 11 to increase the public's understanding of its subscription fee system. It was rare for NHK to take such a step.

In the program, Yoichi Matsubara, a senior NHK director, said, “We will continue to make efforts to politely explain the significance of the subscription fee system and the role of the public broadcaster so that people will pay the subscription fees fairly.”

Another NHK executive expressed anxiety, saying, “I have a fear that, under (N-Koku’s) recent moves, TV viewers’ potential dissatisfaction with NHK could erupt all at once.”

As for the public’s growing recognition of N-Koku and the spread of its assertions, journalist Tetsuo Jinbo praised the party’s PR strategy.

According to Jinbo, viewers’ dissatisfaction with NHK comes from a diverse range.

Some disenchanted viewers feel that its news reporting stance is pro-government. Others feel uncomfortable with NHK programming, believing that its documentary programs are critical of the government.

N-Koku is trying to channel such various discontent with its slogan, “Destroy NHK.”

“The party is attracting people’s attention with unique performances. In addition, it offers concrete policies, such as a measure to scramble NHK broadcasts. How to use those performances and policies depending on the situation is ingenious,” Jinbo said.

Hiroyoshi Sunakawa, professor of media at Rikkyo University, said that the latest sensation involving N-Koku is attributable to the fact that NHK closed a venue for dialogue with viewers.

A scandal involving the unjustifiable practice of embezzling production budgets occurred at NHK in 2004, leading many people to reject payment of subscription fees. As a result, NHK’s annual income decreased by nearly 40 billion yen ($376 million).

“Previously, there was a place where viewers can show their dissatisfaction in the form of declining payments,” he said.

However, NHK has since changed its fee collection method from visiting viewers’ houses to collection through accounts at financial institutions. In addition, the Supreme Court ruled in 2017 that NHK’s subscription fee system was constitutional.

As a result, a place to express dissent disappeared. Subsequently, viewers’ dissatisfaction with NHK increased, and N-Koku is feeding on the discontent.

“NHK should increase avenues of dialogue with viewers even if it takes time. Otherwise, N-Koku will build on their criticism and dissatisfaction more and more,” he added.

(This article was written by Takahiro Kawamura, Keita Mano and Ryo Jozuka.)