Resort hotel on Mt. Rokkosan restored to way it looked in 1929 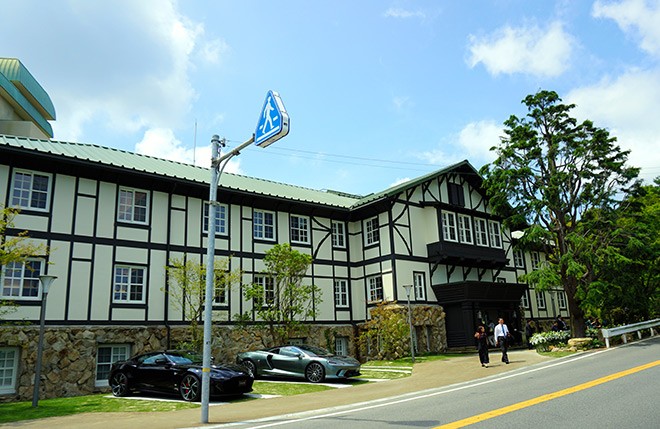 The Rokkosan Hotel building was restored to its original look in 1929 in Kobe’s Nada Ward. (Yuka Kanemoto)

KOBE--The Rokkosan Hotel, hailed as an architectural masterpiece when it opened in 1929, has been restored to its former glory.

The swanky building opened for business on July 20.

The structure was lauded as an outstanding example of “Hanshinkan Modernism,” which flourished in the area around Mount Rokkosan between the Taisho (1912-1926) and the early Showa (1926-1989) eras.

The years took their toll on the original Rokkosan Hotel building. It was shut down in 2015 after it fell into disrepair and failed to meet earthquake-resistance standards.

An Osaka company that took over the building the following year is developing other nearby facilities to transform the area into a new sightseeing destination in the Kansai region.

Funded by Hankyu Electric Railway Co., present-day Hankyu Corp., and other parties, the original Rokkosan Hotel was where Ichizo Kobayashi, founder of the railway company, stayed during his summer breaks. The central government added the structure to its list of Heritage of Industrial Modernization in 2007.

Hankyu Hanshin Hotels Co. transferred the ownership to Osaka-based Hakko Car Group, which sells imported cars. The company held a ceremony July 17 to celebrate the opening of the renovated building, a restaurant and other facilities.

The Rokkosan Hotel building, which was built in British architectural style, was refurbished to its original appearance with white walls, a dark green roof and other features.

Italian architect Michele de Lucchi, who was entrusted to restore the structure, said he bore in mind the necessity of restoring the structure to its original design and revitalizing the building.

He said the floor, ceiling and stairs now gleam like they did in 1929 while the stained glass was kept intact.

Development of the area is moving ahead under the nam of “Rokkosan Silence Resort.”

The main building of the Rokkosan Hotel standing next to the original building will be torn down before a new lodging facility, a multipurpose hall and other structures are built. The location also offers a night view of Kobe.

“We want to complete the facilities as a world-class resort by 2025,” said Junhachi Ikeda, chief executive officer of Hakko Car Group.