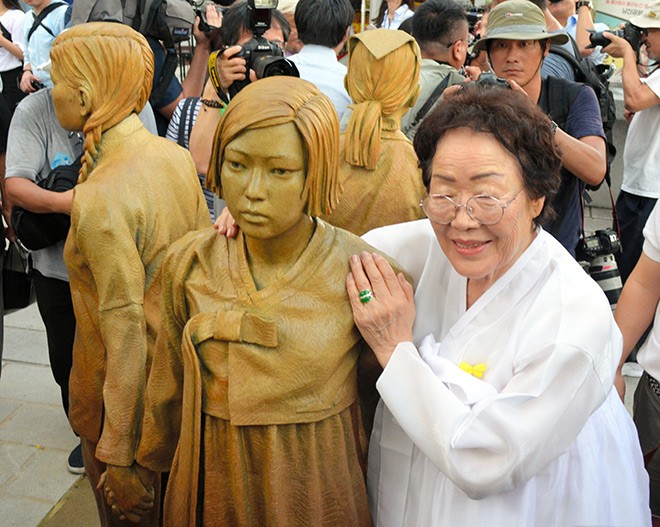 Lee Yong-soo, a former “comfort woman,” with a new statue of a Korean girl set up in Seoul to symbolize comfort women on Aug. 14. (Takuya Suzuki)

SEOUL--As South Korea marked memorial day for "comfort women" on Aug. 14, President Moon Jae-in made a point of not taking Japan to task over the issue that has severely strained bilateral ties.

Instead, he signaled his readiness to seek dialogue with Tokyo in an effort to restore bilateral relations to a normal footing.

Moon did not attend the commemorative ceremony, but posted a statement on a social networking site expressing his determination to resolve the thorny issue.

The president said his administration will “do its best to restore the dignity and honor of the victims,” referring to women forced to provide sex to wartime Japanese soldiers.

He also pledged to work with the international community to "share and spread the message of peace and women’s human rights.”

Many comfort women were from the Korean Peninsula, which was under Japanese colonial occupation from 1910 to 1945.

This year marked the second time the ceremony has been held. Moon attended last year’s event.

Aug. 14 was picked for memorial day observances to honor the late Kim Hak-soon, who on Aug. 14, 1991, became the first woman to publicly share her humiliation and suffering by allowing her name to be used.

While Moon’s statement underlined his intention to give top priority to the victims’ human rights, it did not contain language denouncing Japan.

The comfort women issue is a longtime source of friction between the two countries.

His decision not to further inflame tensions with Japan was seen as an attempt to try to patch things up through diplomatic means.

The same day, the Seoul city government unveiled statues representing comfort women from South Korea, China and the Philippines at the former site of the Chosen Jingu, a guardian Shinto shrine Japan built during colonization.

The sculptures were presented by a private foundation in San Francisco, according to city officials.

The new monuments brought to 20 the number of such sculptures in Seoul.

Japan has forgone lodging a protest against comfort women monuments in South Korea, except for those erected near the Japanese Embassy and Japanese consulate generals.

The unveiling ceremony in Seoul was attended by about 300 people, including Lee Yong-soon, a former comfort woman, and Seoul Mayor Park Won-soo.

Lee, 90, called for the landmark accord reached between Japan and South Korea under President Park Geun-hye in 2015 to be scrapped. The pact was intended to “finally and irreversibly” settle the prickly question, with Japan issuing an apology to victims and providing 1 billion yen ($9.4 million) to a foundation set up in South Korea to assist the victims financially.

However, the foundation was recently disbanded following a public outcry over the bilateral agreement.

Lee, in her address at the ceremony, called for Prime Minister Shinzo Abe to apologize to her in person for her ordeal.

Aug. 14 also marked the 1,400th consecutive weekly protest rally held near the Japanese Embassy by former comfort women and their supporters to demand an official apology and compensation from the Japanese government.

In the gathering, known as the "Wednesday rally," thousands of demonstrators chanted slogans, such as “The Japanese government should recognize comfort women as victims of a war crime” and “Those responsible should be punished.”

Organizers read messages of solidarity from supporters in North Korea and around the world.

(This article was written by Takuya Suzuki and Hajimu Takeda in Seoul.)