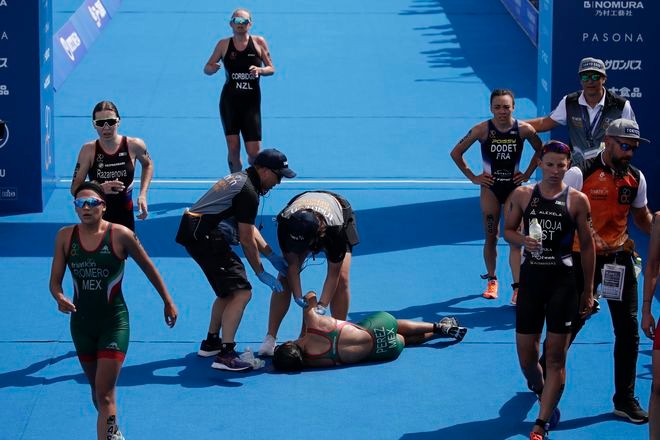 Mexico's Cecilia Perez, center, collapses after competing in a women's triathlon test event at Odaiba Marine Park, a venue for marathon swimming and triathlon at the Tokyo 2020 Olympics on Aug. 15 in Tokyo. (AP Photo)

The International Triathlon Union's decision to reduce the distance of the run segment in Thursday's women's Olympics qualifying event because of heat concerns is the latest setback for Tokyo 2020 organisers battling extreme temperatures.

The ITU reduced the distance of the run section with concerns the weather conditions at the end of the race would have fallen within "extreme levels."

It is the latest of Tokyo 2020's test events to highlight concerns over the sweltering summer temperatures that can be expected at next year's July 24-Aug. 9 Games.

Soaring temperatures have killed at least 57 people across Japan since late July, highlighting the possible health threat to athletes and fans.

Tokyo 2020 spokesman Masa Takaya said lessons would be learned from the triathlon event.

"The ITU informed Tokyo 2020 that a comprehensive review is necessary soon after the competitions this week," Takaya said in a statement.

"In this respect, we will continue to work closely together with the team.

"Tokyo 2020's collaboration with the ITU (has) led to the implementation of measures to combat summer heat, including change of races' start time, revised heat stress protocols, specially trained personnel and extra water stations on the course."

The swimming and cycling segments remained the same after the ITU deemed the water quality and temperature in the Odaiba Marine Park course to be within regulation.

Thursday's triathlon race, however, is another setback for Tokyo 2020 organizers, following a difficult period of test events.

It was reported last weekend that several athletes were treated for heatstroke at the 2019 World Rowing Junior Championships in Tokyo, which was another test event.

There were also complaints from spectators at the lack of protection from the sun, as the venue was constructed with the roof only covering about half of the 2,000 seats.

The decision was made in 2016 to reduce the size of the roof at the newly-built venue as a cost-cutting measure by Tokyo Metropolitan Government.

"We will not be changing the venue in any way and will not be increasing the size of the stand cover before the Tokyo 2020 Olympics," read a statement from the Tokyo Metropolitan Government.

Tokyo organizers, however, said earlier this week the water quality was not an issue for the ITU, who were prepared to let their test event to go ahead as scheduled.

"The test results for the past week show that the water quality is good enough and that the number of E. Coli and enterococci are continuously well below the level of ITU criteria," Tokyo 2020 said in a statement on Tuesday.

They added they would install more filtering screens ahead of the Games to those already in place after 2017 tests showed levels of E. Coli up to 20 times above the accepted limit and fecal coliform bacteria seven times higher.

The single-layer underwater screens installed in Tokyo Bay have helped reduce the bacteria, according to organizers.

"For next year, we will install triple-layer screens to assure the successful delivery of the competitions," they added.

"The installation of triple-layer screens takes a significant amount of time and... (so) we decided to go with the single-layer screen under the agreement with the federations."