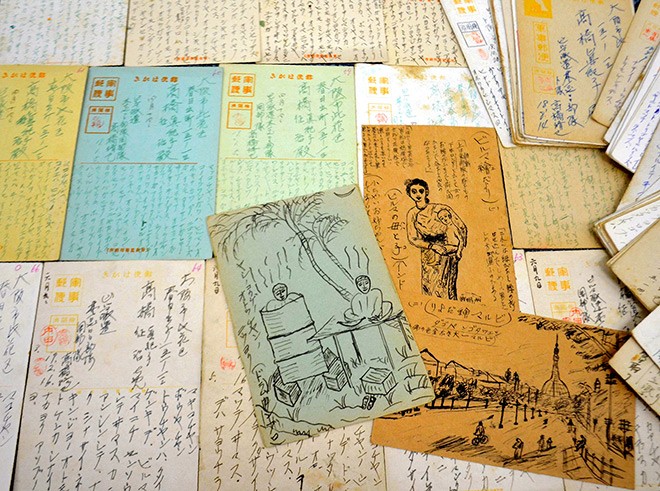 "Dear Mako-chan, how are you? Are you getting along well with your little brother?"

So reads one of the more than 200 postcards Shumi Takahashi sent to his family from the war front in Burma before he died in one of the most catastrophic defeats for Japan in World War II.

His daughter, Makiko Inada, 79, who grew up without her father, keeps the messages at her home in Nagareyama, Chiba Prefecture, and feels nothing but love for him every day.

Inada's younger brother, Seiji, was born after the father was called for duty to the Imperial Japanese Army, and never had the chance to meet his dad.

The postcard, dated June 25, 1943, when Inada was just 3, ends with some fatherly encouragement, saying, "Please eat a lot and grow to be a strong, good girl."

The message was written in katakana, so it could be read easily by her.

The postcards may have faded over time, but the love comes through clearly.

When the war broke out, Takahashi was running a business manufacturing vehicle license plates in Osaka.

Inada was just barely 2 years old and his wife was pregnant with Seiji when he was called for duty.

As a member of the signal corps, Takahashi left Japan in autumn 1941 and was sent to Burma, today's Myanmar, the following year.

Wherever he ended up, Takahashi wrote to his family back in Japan.

"How's Mako been? Any updates on the baby? Are you doing well after childbirth?"

The young father anxiously asked these questions in a postcard delivered to his wife on March 4, 1942.

As a business owner, he also expressed concerns over his employees' future.

In a postcard dated Feb. 5, 1944, he wrote to his wife to ask relatives and others to take care of the employees and help them find new jobs.

"It's difficult to expect my return home alive," Takahashi wrote in the same postcard. "But, with a one in a million chance, if I see you again, I'll start from scratch."

In March 1944, the Imperial Japanese Army launched a military offensive aiming at the seizure of Imphal, a city in northeastern India, which was under British rule then.

Takahashi's troop joined the ambitious mission, later called the Battle of Imphal, or the Japanese invasion of India.

Poorly equipped and insufficiently fed, the Japanese force of 100,000 lost about 30,000 lives in the mission, with about 40,000 becoming sick or wounded.

Takahashi was killed in the Laimanai area on the Indian side in June. He was 33.

The Imperial Japanese Army halted the deadly operations there in July.

'SUCH A NICE MAN'

While Takahashi was risking his life on battlefields overseas, his family, including Inada, fled to Mihara, Hiroshima Prefecture, for safety, where the mother's side of the family lived.

The family continued to reside there after the war, with Inada being raised by her mother and grandmother, who worked hard to make ends meet by selling ceramic products.

Inada grew up with few memories of her father, but still remembers what her mother always said: "Your dad was such a nice man. I could not ask for better."

At times, young Inada wondered how her life would have turned out if her father had been alive. But eventually she came to accept her life without him as "my fate."

Years passed and Inada married and became a mother.

She learned that the senior officer in her father's troop was alive and well in Fukuoka Prefecture and went to see him with her mother in 1979, where she would learn how her father died.

According to the former senior officer, Takahashi was preparing a meal with three other soldiers at the bottom of a deep canyon when they were attacked by enemy aircraft and bombed.

The four were killed, apparently struck by flying bomb fragments, with their limbs blown off.

Japanese troops wrapped their bodies in a blanket and buried them at a site nearby, the former senior officer said.

Inada took her father's death in the bombing as consolation, knowing that numerous Japanese soldiers died of starvation in the Battle of Imphal.

"Dad didn't have to suffer a lot, did he?" Inada said to her mother, comforting each other.

Until then, Inada had known of the existence of her father's letters, but never read them thoroughly.

Sixty-six of the 223 postcards that Takahashi sent from Burma were directly addressed to Inada and Seiji. Having inherited them from her mother, Inada made several attempts to read them, but couldn't make it through them. Tears filled her eyes. It was just too much.

Things changed when a bereaved family member whom Inada met through a veterans association encouraged her to publish a booklet about the postcards.

At last, 12 years ago, Inada absorbed all of the words from her father.

"I, too, am looking forward to the day when I go to the zoo with you, Mako-chan, and my baby boy, carrying a lunchbox together. Until then, please take care of yourself."

Inada was struck by how much he cared and worried about her, and how sad he must have been knowing that he would die leaving behind small children.

Most of the postcards are covered with words in small characters. Many are filled with vivid descriptions of life on the war front and illustrations of people he encountered in foreign countries.

Still, Inada believes her father could not write everything he wanted, due to wartime censorship.

Since that time, Inada has made active efforts to learn about her father's footsteps and the war that took his life.

She has participated in the veteran association's activities and visited Myanmar twice to commemorate the war dead.

Ahead of the 74th anniversary of the end of World War II hostilities on Aug. 15, Inada ran her eyes over the postcards once again.

"We should not go to war, by any means," she said. "Those who went to the battlefront and those who were at the home front--war leaves nothing but grief in everyone's heart."

She picked up the last postcard from her father, dated March 11, 1944, a few months before his death.

"Dear Mako-chan and Seiji-chan," it reads. "I understand you are both getting along well and playing vigorously. I'm doing very well, and fighting. Please do not worry about Dad. Send my best wishes to the neighbors and people at the factory. Sayonara."