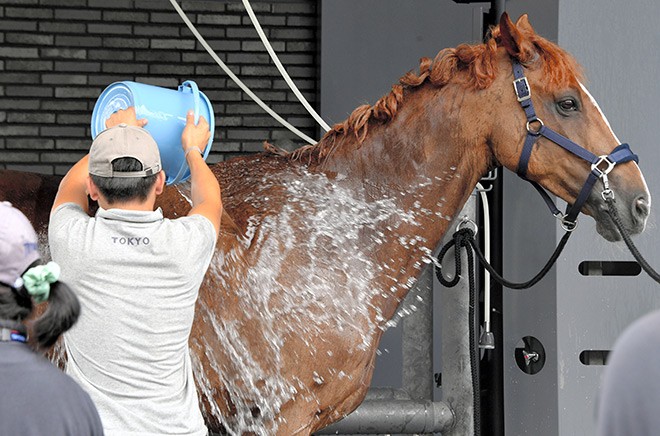 A staff member pours water over a horse in front of a stable in Tokyo’s Setagaya Ward after an equestrian test event on Aug. 12. (Kotaro Ebara)

Humans aren't the only ones enduring the heat at test events ahead of the 2020 Tokyo Olympics and Paralympics.

In equestrian events, riders raised concerns over the effect of high temperatures on horses during next year's Olympics at test events held Aug. 12-14 at two venues in the capital.

Equestrian is the only event in which animals participate at the Games.

At the Sea Forest Cross-Country Course in Koto Ward, 16 riders and their horses ran along a 3,000-meter course on Aug. 13, jumping over obstacles.

The competition started at 10 a.m., but the temperature was already over 30 degrees in central Tokyo.

Yoshiaki Oiwa noticed something unusual about his horse just after they entered the course, exposed to direct sunlight.

"After the horse left the cool stable, it kept being bothered by the heat," Oiwa said.

As a result, they were unable to reach the finish line within the specified time.

As competition horses have a low tolerance for heat, the International Equestrian Federation has taken measures to keep them cool.

On this day, it set up tents at three locations to allow horses that had just finished running to cool off with cold water. It also prepared fans and 2.4 tons of ice for them. An emergency vehicle for horses was also on standby.

Still, many riders called for moving up the scheduled 8:30 a.m. start time for equestrian events at the 2020 Games.

William Fox-Pitt, a British rider, said it should start between 6 a.m. to 7 a.m.

Oiwa echoed the sentiment, saying: "(The organizing committee) should try to create an environment where horses can run without feeling the extreme heat. They should consider moving up the starting time.”

Yasuo Mori, deputy chief of the events operations bureau of the organizing committee for the Tokyo Games, said: “We received various opinions. Now that we have scientific data, we'll start discussing it."