Lisa’s In and Around Tokyo: Izu Wasabi mini Museum--Get the full story on this strong condiment 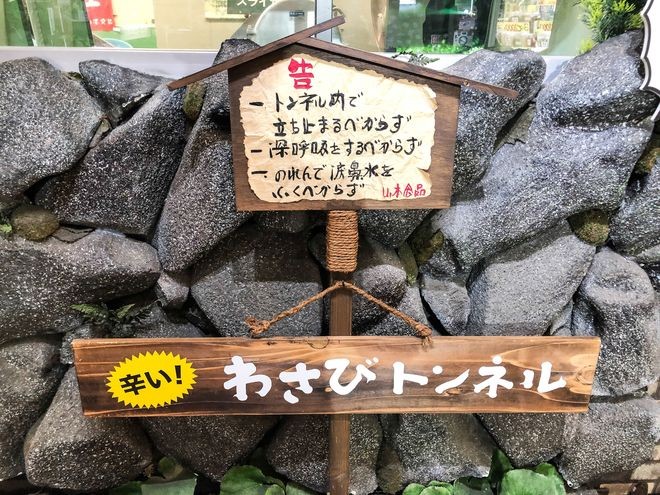 A warning sign at the entrance of the Wasabi Tunnel. Curious visitors can go through it to experience the pungent odor that irritates the nose. (Photo by Lisa Vogt)

Can you translate the Japanese expression "wasabi ga hana ni tsuuuuuuun to kuru" into English?

The tsuuuuuuuun part is tricky, isn’t it? I suppose there are many ways one could phrase it, but I like “wasabi clears my sinuses” because I think it creates the image of air flowing through the nose, i.e., tsuuuuuuun. What do you think?

Wasabi is endemic to Japan. The oldest existing mention of wasabi was on a late seventh-century wooden plate found at the ruins of Asuka-kyo in Nara Prefecture, and it was already registered as a local specialty and used for medical purposes. Coming from a young country with a history of only about 250 years, this is mind-boggling!

Shizuoka Prefecture, which can be reached on a day trip from Tokyo, is said to be the birthplace of wasabi cultivation. Today, the top three places in Japan where wasabi is cultivated are Shizuoka, Iwate and Nagano prefectures.

The other day, I happened to come across a museum dedicated to wasabi right around the corner from the place I intended to visit--a place having to do with pollack roe that I’ll write about next month. Or next-next month, maybe.

Anyhow, I learned how much I didn’t know about Wasabia Japonica Matsum, also called wasabia wasabi, at the Izu Wasabi mini Museum.

The highlight of the museum is the Wasabi Tunnel. There’s a warning at the entrance urging visitors not to stop (in other words, to keep walking) and not to breathe deeply. Intrigued, I went inside the short tunnel, and three seconds later, I rushed out. Oh, my poor nose and eyes!

Taste is divided into five categories: bitter, salty, sour, sweet and umami. I learned at the museum that spiciness isn’t a type of taste, but is a thing perceived through one’s pain sensors.

Wasabi is said to have evolved to be sinus-permeating in order to protect itself from predators like wild boars and deer. We humans must have a sadistic streak within us because we rather enjoy this pungent condiment.

In March 2018, Shizuoka’s traditional method of cultivating wasabi was certified as a Globally Important Agricultural Heritage System under the Food and Agriculture Organization of the United Nations.

Walk into any big supermarket in Japan, North America or Europe and you’ll see packaged sushi ready for consumption. Each container comes with a packet or two of wasabi. But have you ever taken a good look at the ingredients printed on the tiny packets?

More often than not, there won’t be any wasabi inside. Instead, you’ll usually find that it’s horseradish with green food coloring and additives. Well, I guess we get what we pay for.

Do savor authentic sinus-clearing wasabi, if you can.

This article by Lisa Vogt, a Washington-born and Tokyo-based photographer, originally appeared in the July 21 issue of Asahi Weekly. It is part of the series "Lisa’s In and Around Tokyo," which depicts the capital and its surroundings through the perspective of the author, a professor at Meiji University.