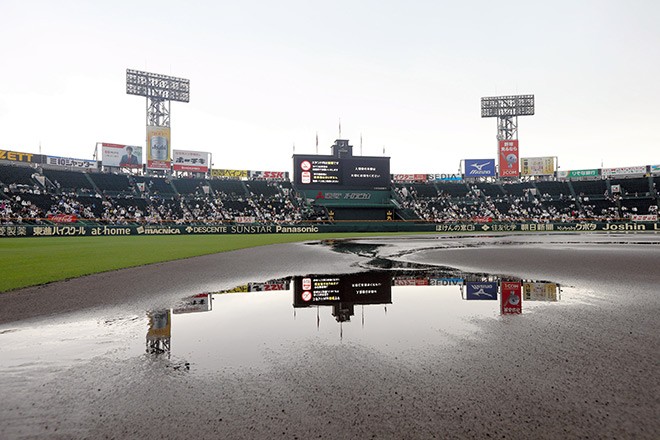 Rain delays the start of a semifinal game by one hour on Aug. 20 during the National High School Baseball Championship at Koshien Stadium. (The Asahi Shimbun)

A “demon” is said to inhabit Koshien Stadium in Nishinomiya, Hyogo Prefecture, the venue of the annual National High School Baseball Championship in August.

One of the manifestations of its powers may be the “hamakaze” sea breeze from the right field side. It turns a potential home run into a right fly and carries a pop-up into the left field stands.

“Meteorologically speaking, that’s a wind from the southwest, blowing from Osaka Bay to Mount Rokkosan during the daytime,” explained meteorologist Hidekazu Miura, 37.

An employee of Weathernews Inc., a weather information service company, Miura currently works at Koshien Stadium, where he collects meteorological data crucial to determining when to suspend or delay games due to inclement weather.

Arriving at the stadium at 5 a.m. every day, Miura spends the entire day closely watching for approaching rain clouds and checking hamakaze to determine whether the breeze has the power to blow away clouds.

He sniffs the air for any telltale smell of imminent rain.

When rain interrupts a game, all his senses kick into high gear as he assesses when it will let up.

The toughest call he had to make was during a game between Yokohama and Riseisha, one of the most anticipated cards during the 2016 championship.

The game was interrupted by the rumbling of thunder. It resumed, only to be interrupted again for one hour and 23 minutes while dusk was approaching.

“It was a situation that really put a meteorologist’s expertise to the test,” Miura recalled.

With the sun mercilessly beating down on Koshien, the high school baseball championship is practically synonymous with midsummer. But the notorious hamakaze southwesterner begins to abate toward the end of the championship, and sudden showers become less frequent.

“Collecting data in the deserted stadium early in the morning, I strongly feel that the heat passes its peak around the time when the quarterfinals are over,” Miura noted.

Every year, I feel the signs of early autumn when no more cheering at Koshien is heard on the radio or TV. I imagine some families feel panic when they realize that their school-age children haven’t even started working on their summer holiday homework assignments.

After weeks of nonstop excitement at Koshien, the championship game is slated for Aug. 22. I hope to thoroughly enjoy the climactic conclusion that marks the end of summer, checking the strength and direction of hamakaze from the corner of my eye.