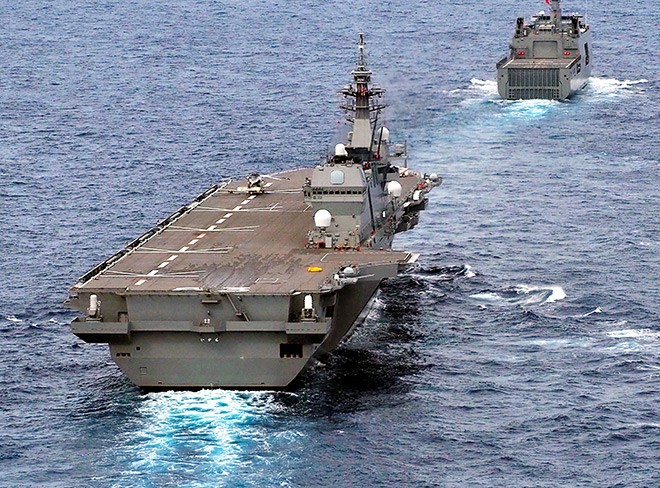 The government has been caught in a lie over its plans to retrofit the Izumo destroyer and effectively transform the vessel into an aircraft carrier.

Officials initially presented the project as simply one that would strengthen the nation's ability to defend outlying islands and secure the safety of Self-Defense Force pilots by reducing their flight times.

When Defense Minister Takeshi Iwaya was asked by opposition lawmakers in March if U.S. fighter jets would be allowed to use the Izumo, he stated that only if the aircraft had no closer landing points while flying out at sea.

It now turns out that Japanese officials then informed their U.S. counterparts that U.S. fighter jets would likely be the first to use the Izumo for landings and take-offs.

Improvements to the Izumo deck and other measures to allow aircraft to land and take off from the ship will finish in fiscal 2020. Another MSDF destroyer, the Kaga, will also be retrofitted, with plans calling for completion in fiscal 2022.

The government has also approved a plan to purchase U.S.-made F-35B fighter jets which have short take-off and vertical landing capabilities. The F-35B jets will be mainly used on the Izumo and Kaga, but the aircraft will not be deployed until after fiscal 2024.

That leaves open the possibility of at least a three-year period when the Izumo would be capable of being used as an aircraft carrier, but with the Air SDF having no such aircraft in its arsenal.

According to several government sources, when Gen. Robert Neller, who was then commandant of the U.S. Marine Corps, visited Japan in March, Defense Ministry officials briefed him on the plans to retrofit the Izumo and said U.S. military F-35B jets would likely be the first to use the Izumo after it became a flattop. They asked for U.S. cooperation and advice in the operation of the F-35B jets. The U.S. jets would likely use the Izumo during joint training exercises with the SDF as well as when U.S. jets faced an emergency situation requiring immediate landing.

The sources said that Neller promised to provide the necessary support.

This is the not first time explanations regarding the Izumo have shifted from initial plans.

When the Defense Ministry in fiscal 2017 commissioned a study into the feasibility of retrofitting a destroyer into an aircraft carrier, the primary reason given was to provide rear-line support to the U.S. military. The study was conducted on the assumption that F-35B jets operated by the U.S. military would be the primary users of a retrofitted destroyer. Having the ASDF operate its own F-35B jets was not considered in the study.

Once the government decided to go ahead with the retrofitting, officials had to engage in linguistic gymnastics to appease members of junior coalition partner Komeito who were uncomfortable with Japan having a vessel that could be used as an attack ship.

For that reason, the ruling coalition agreed to describe the Izumo as a "multi-purpose operation destroyer" rather than admit it was, in effect, an aircraft carrier.

SDF officers are also raising doubts about the current plan for using the Izumo.

The F-35B fighter jets to be operated by the ASDF will normally be based on land and only be deployed to the Izumo when the need arises. But some Defense Ministry officials point to the fact that a high degree of skill and training are required to land fighter jets on a ship in motion at sea and question whether the vessel will be able to function effectively, given it does not have aircraft permanently based on it.