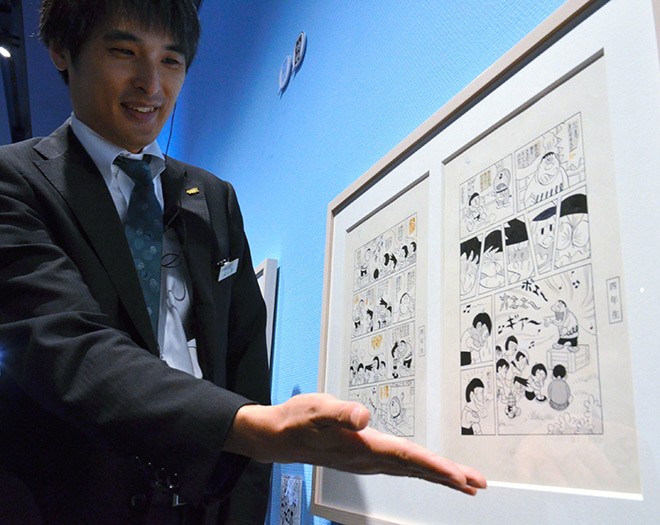 Original manga manuscripts and magazines on display for the special exhibition celebrating the 50th anniversary of "Doraemon" at the Fujiko F. Fujio Museum in Kawasaki (Shigehiro Saito)

KAWASAKI--He may not look it, but Doraemon the cat-shaped robot is 50.

A special exhibition celebrating a half century of the iconic manga and anime character is being held at the Fujiko F. Fujio Museum here.

Fujiko, the pen name of Hiroshi Fujimoto, was best known for his manga series about the robotic cat, who appears from the future to help a boy called Nobita with his wide array of secret gadgets.

A bronze sculpture of the author’s right hand is being exhibited at the venue.

“Doraemon” was first serialized in the January 1970 issues of Shogakukan Inc.’s “Yoiko,” “Shogaku Ichinensei” and other publications for children.

The exhibition is being held in three stages through January 2021.

In the first part titled “Boku Doraemon” (I’m Doraemon), which ends on Jan. 30, 2020, a total of 142 artworks are on display, including original manga manuscripts from the very first episode.

The second part starts in February 2020, followed by the third part in July that year.

The museum’s cafe is also serving Doraemon-themed sweets, such as a tart decorated with a scene in which Doraemon emerges after being sent back in time from the future.

Shohei Misaki, 30, a local government employee who visited the museum with his wife from Osaka, said he was impressed by how Fujiko tailored his illustrations for the manga's first episode to match different children’s magazines.

“We’d like visitors to check out the original manuscripts and see how Doraemon evolved through design changes to look sharp and sophisticated over the years,” said museum director Zensho Ito.

Reservations are required for admission and can be obtained online. Entry is limited to four scheduled times a day.