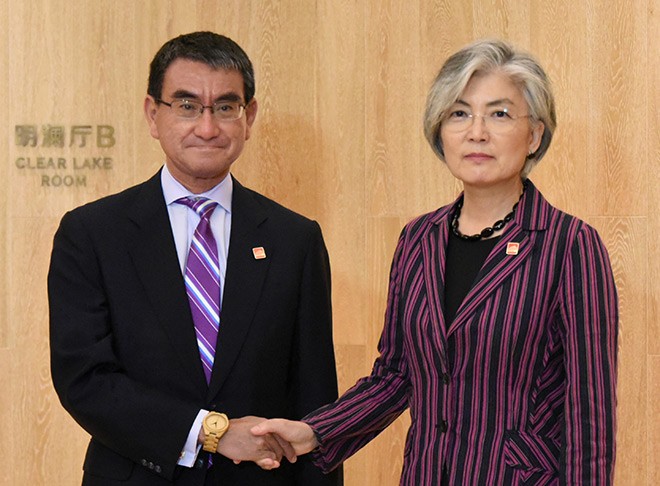 BEIJING--The foreign ministers of Japan and South Korea made scant progress here in mending very chilly bilateral relations, prompting China to issue a rare call for the two countries to reconcile their differences.

Relations between Japan and South Korea nosedived over a court ruling in Seoul late last year related to wartime laborers, which was followed by a trade dispute after Tokyo imposed export control measures on materials used to manufacture electronic devices.

Foreign Minister Taro Kono was in the Chinese capital for meetings with his South Korean and Chinese counterparts on Aug. 21.

After the trilateral meeting of foreign ministers, Wang Yi, the Chinese foreign minister, referred at a news conference to a term used in China that means to think about matters from the perspective of the other party.

"I hope that Japan and South Korea deal in a constructive manner with their differences and appropriately handle the pressing issues that exist between them," Wang said.

After the meeting between the three foreign ministers, Kono met separately with South Korean Foreign Minister Kang Kyung-wha for about 40 minutes, but visible progress in mending differences was not made.

According to government sources on both sides, Kono floated the possibility of a meeting of relevant officials being held to discuss the strengthened export control measures, but only if certain conditions were met.

Kang called for an immediate withdrawal of those measures, saying the situation had become very severe.

The two sides did not say what, if any, discussion was held on the General Security of Military Intelligence Agreement (GSOMIA) between the two nations on the sharing of sensitive military intelligence.

Some in South Korea have called for the agreement to be scrapped. The agreement is valid for a year, but automatically renewed unless one side wants to dissolve it. The deadline this year for notifying the other side of its intention to abandon the pact is Aug. 24.

After his meeting with Kang, Kono did not divulge what was discussed with regard to GSOMIA. South Korean officials who briefed reporters also said that Kang only touched upon the fact that consideration was being given to what to do about the agreement.

On the issue of court-ordered compensation for wartime laborers, Kono again called for measures to deal with what he described as a violation of international law. The two foreign ministers agreed it was the key issue now facing the two nations and confirmed the need to try to resolve it.

What both sides want to avoid is a public backlash if they are seen to be compromising on the issue.

"We can only wait for South Korean public opinion to calm down," said a Japanese government source.

In the trilateral meeting, Kang called for the retraction of arbitrary export control measures although she did not explicitly name Japan.

According to government officials, Kono chided Kang for raising the matter at an inappropriate forum.

While it was unusual for Wang to encourage Japan and South Korea to work to overcome their differences, one Chinese diplomatic source said: "As trade friction between China and the United States becomes protracted, the importance of strengthening economic ties between China, Japan and South Korea will increase. Wang's comment was close to his true feelings on the matter."

(This article was written by Tamiyuki Kihara, Takashi Funakoshi and Takeshi Kamiya.)