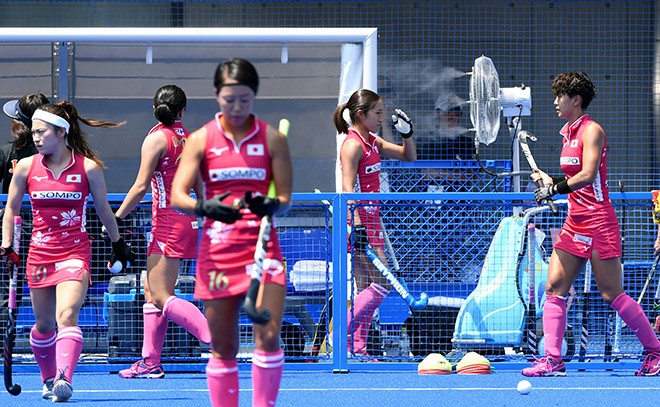 A mist sprayer is set up beside the bench for players at the venue of a field hockey test event in Tokyo on Aug. 17. (Takuya Isayama)

Athletes coming from overseas to compete in the 2020 Games might want to take a sauna to prepare for Tokyo's sauna-like summer heat.

The hot tip is among 10 the International Olympic Committee (IOC) has posted on its website in a preventive guideline for athletes called “Beat The Heat.”

Harsh temperatures have plagued athletes at test events this summer in and around the capital, raising fears about athletes' readiness for the main event.

Using a sauna at between 70 and 90 degrees or taking a bath at between 40 and 42 degrees is a good way to get acclimatized to Tokyo's steamy weather, the guideline says.

The guideline, compiled from proposals by the IOC medical committee, opens with a warning to athletes: “Tokyo 2020 will be hot and humid, and we want you to be aware and as prepared as possible.”

It advises athletes to train in hot and humid conditions similar to Tokyo for at least two weeks.

The sports body says they should start a regular hydration schedule and put it in practice before arriving for the Games.

Athletes are also advised to put on ice vests during their warm-ups and to wear sunglasses and sunscreen during their competitions.

If competitors coming from outside Japan can't train for two weeks in conditions similar to Tokyo, the guideline says they should set aside at least one week to adjust.

When the IOC sought a host city for the 2020 Olympics, it insisted that the sports event be held between July 15 and Aug. 31.

The IOC was cool toward an autumn Games since it could be in direct competition with numerous popular sports in the United States and Europe, including the Major League Baseball playoffs and the World Series. TV stations around the world are paying huge amounts for the broadcasting rights to the Olympics.

Doha, in its bid to host the 2020 Games, proposed holding the event in October to avoid the country's extreme heat, but its proposal was not accepted. Doha lost its bid during the first round of the selection process.

The Tokyo Olympics will be held between July 24 and Aug. 9 next year.

When Tokyo's bidding committee submitted its candidacy file to the IOC, it said that during the summer period, weather in the capital was mostly sunny and warm, making it an ideal climate for athletes to perform at their best.

However, between July 1 and Aug. 18, 101 people died from heatstroke within Tokyo’s 23 wards, the Tokyo Medical Examiner’s Office said.

During the single week between July 29 and Aug. 4, 18,347 people were taken to hospital for heatstroke across Japan, according to the Fire and Disaster Management Agency.