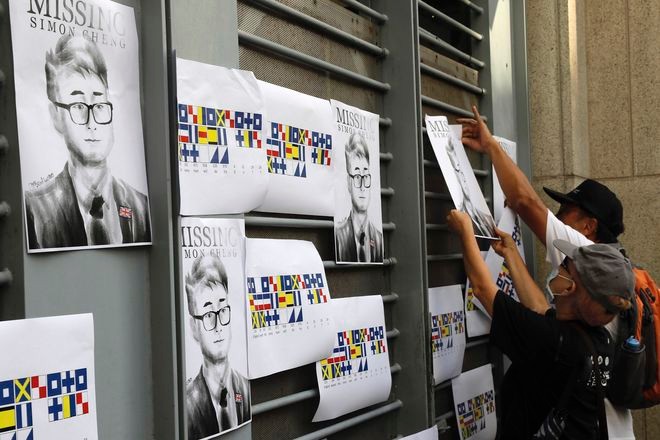 Supporters attach posters to a wall outside of the British Consulate in Hong Kong during a rally in support of an employee of the consulate who was detained while returning from a trip to China on Aug. 21. (AP Photo)

HONG KONG--The Canadian Consulate in Hong Kong said on Friday it has suspended travel to mainland China for local staff, just days after an employee of the city's British Consulate was confirmed to have been detained in China.

The Canadian Consulate, in an email to Reuters, did not provide a reason for the travel restrictions.

On Wednesday, China's foreign ministry confirmed that Simon Cheng, an employee of the British mission, had been detained in the border city of Shenzhen neighboring Hong Kong.

Hong Kong has been gripped by anti-government protests for weeks, with China accusing Britain and other Western countries of meddling in its affairs.

Canada has warned increased screening of travelers' digital devices had been reported at border crossings between mainland China and Hong Kong, as anti-government protests in the Chinese-controlled territory head into their 12th week.

The Canadian government updated its entry and exit guidance for China on its website to include the advisory on Thursday.

China warned Ottawa not to meddle in Hong Kong's affairs.

Canadian Prime Minister Justin Trudeau said on Wednesday that Canada was paying close attention to events in Hong Kong, and called for restraint and respect for human rights.

Hong Kong has been rocked by protests for nearly three months, and the city is bracing for further demonstrations and a "stress test" of the city's international airport at the weekend.

The protests, which escalated in June over a now-suspended bill that would allow criminal suspects in Hong Kong to be extradited to mainland China for trial, have grown into wider calls for political freedom.