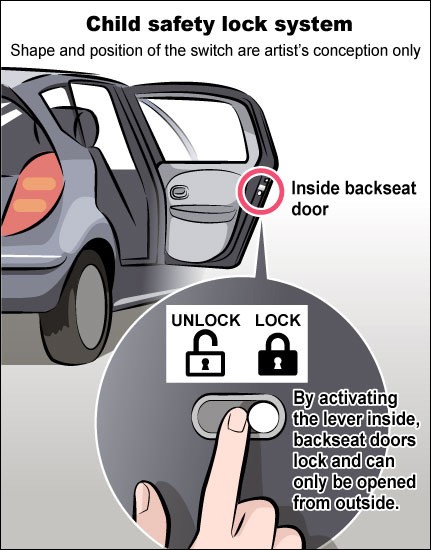 NAHA--A child safety lock likely played a role in the death of 3-year-old girl who was found in the locked backseat of a car and later died of heatstroke here, according to police.

Okinawa prefectural police said the girl’s mother found her lying on her side in the backseat of the vehicle parked at their home in Naha at around 2 p.m. on Aug. 24.

The girl hadn’t been seen since before noon.

Her mother rushed her to a hospital, but the child was confirmed dead shortly after arrival. Prefectural police on Aug. 25 announced that she died of heatstroke.

When she was found, both sides of the sliding doors of the backseat of the car were locked by the child safety lock system, which prevents small children from opening the door by accident from inside while the vehicle is moving.

Police said a car key that opens and closes the doors by pushing a button was found in the backseat. The doors of the driver’s seat and front passenger’s seat were unlocked.

Police believe the child safety lock system activated after the toddler used the car key to open the backseat door and got inside the car, locking her inside from the backseat area.

The high temperature in Naha on Aug. 24 was 32.2 degrees. According to an experiment by the Japan Automobile Federation (JAF), when the temperature outside a car reaches 35 degrees between noon and 2 p.m., the temperature inside hits nearly 50 degrees.

Temperatures in the car are believed to have been in that range at the time the girl was trapped in the vehicle.

Police believe the girl obtained the car key on her own.

“The public should take care to ensure car keys are always placed out of children’s reach,” a prefectural police official said.

According to several automobile makers, child safety locks have been available in vehicles since the 1970s. Typically, the system is activated by operating the lever that is installed in the inside of the backseat door while the door is open. Once activated, the doors lock and can only be opened from the outside.