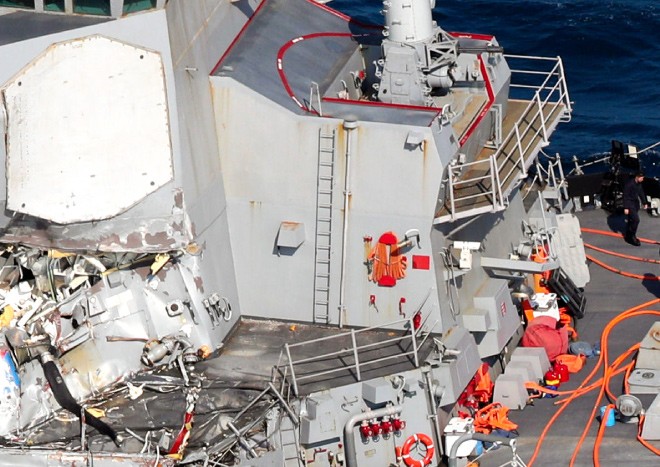 The USS Fitzgerald, which suffered severe damage on the starboard side, is seen in waters off Shimoda, Shizuoka Prefecture, on June 17, 2017. (Asahi Shimbun file photo)

A collision between a U.S. Aegis destroyer and a container ship occurred because an officer steering the warship failed to recognize the danger posed by the oncoming vessel, the Japan Transport Safety Board concluded on Aug. 29.

According to the board’s report, the U.S. Navy destroyer was sailing at a speed of about 37 kph in the sea east of the Izu Peninsula in Shizuoka Prefecture after leaving U.S. Yokosuka Naval Base in Kanagawa Prefecture.

The ACX Crystal and another vessel were sailing eastward side by side at that time and approaching from the right front of the guided-missile destroyer.

The Fitzgerald crossed in front of another vessel at around 1:28 a.m. before colliding with the ACX Crystal two minutes later.

A crew member of the destroyer alerted an officer in charge of steering the ship of the danger of collision 10 minutes before the accident occurred.

But the officer, who was distracted by the other vessel, did not heed the warning and steamed ahead without slowing the Fitzgerald.

A subsequent disruption in the destroyer’s radar system made it impossible for a crew member to have a picture of the ship's surroundings, but no lookouts were put in place.

The officer recognized the danger of a collision only three minutes before it happened.

The officer ordered evasive measures, including steering to the right and increasing speed and turning to the left, but withdrew those orders soon afterward.

The Fitzgerald steered hard to the left one minute before the collision.

The board said the ACX Crystal was slow to take evasive action as it believed that the U.S. warship had the primary responsibility to avert a collision.

Seven U.S. sailors were killed in the accident, and the captain of the Fitzgerald was later relieved of his command and two other top officers removed from duty aboard the ship.