Australia to improve East Timorese Internet and naval base 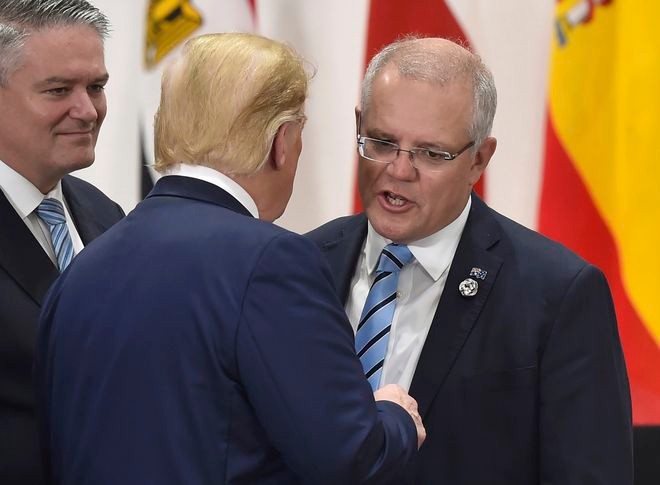 Australia's Prime Minister Scott Morrison, right, chats with U.S. President Donald Trump, center, prior to the session 3 on women's workforce participation, future of work, and aging societies at the G-20 summit in Osaka in June 29. (Pool Photo via AP)

CANBERRA--Australia has committed to invest in East Timor's naval infrastructure and provide an undersea Internet cable between the countries as China increases its influence in the region.

Prime Minister Scott Morrison arrived in the East Timor capital Dili on Friday to exchange diplomatic notes that activate a new maritime boundary combined with a Timor Sea seabed oil and gas revenue-sharing deal on the 20th anniversary of a United Nations-sanctioned vote that led to the half-island nation becoming independent of Indonesia.

Australia will also use the occasion to announce support for building a new wharf at the Hera Naval Base on East Timor's north coast that will help the country operate two Guardian Class patrol boats that will be gifted by Australia in 2023, a government statement said.

Australia also plans to link East Timor to an Australian cable system that runs between the northern cities of Darwin and Port Hedland. Australia will pay for the initial engineering and design work, the statement said.

East Timor is one of a few countries without a fiber-optic Internet connection and relies on slow and expensive satellite services.

"This is a new chapter for Australia and Timor-Leste that is based on our shared respect, interests and values," Morrison said, referring to the country by the name the East Timorese use.

"Timor-Leste has made incredible progress in the last 20 years and we want to be there to help Timor-Leste grow for the next 20 and beyond," he added.

Dividing the Timor Sea energy revenue riches, including the untapped Greater Sunrise field worth an estimated $50 billion, has been a source of diplomatic conflict between the near-neighbors.

A former Australian spy and his lawyer are being prosecuted in Australia for disclosing allegations that Australia bugged East Timor's Cabinet rooms in 2004 to gain an unfair advantage in Timor Sea treaty negotiations. A treaty signed in 2006 was scrapped and a replacement treaty that was more generous to East Timor was signed last year.

The prosecutions have prompted street protests in Dili by supporters of the Australian whistle-blowers.

Some East Timorese lawmakers want to accept Chinese investment to pipe Greater Sunrise oil and gas to East Timor for processing, prompting fears that the fledgling democracy could become overly indebted to China, like other economically vulnerable island nations in the region.

The East Timor Internet cable promise follows Australia committing to carry most of the costs of running similar cables from Sydney to Papua New Guinea and the Solomon Islands.

The Papua New Guinea and Solomons cables were offered to prevent Chinese telecommunication giant Huawei from providing alternative networks. Australia has barred Huawei from its own national broadband network and unfolding 5G networks on security grounds.

Australia led the United Nations military force that brought peace to East Timor in the bloody aftermath of the 1999 independence ballot. The East Timorese invited the Australian military back in 2006 to restore order after a military mutiny.

Morrison's visit to East Timor is the first by an Australian prime minister in 12 years. Australian is stepping its aid program in the Asia-Pacific region as a counter to deepening Chinese investment.