Med schools offer to return fees to ‘failed’ applicant; she sues instead 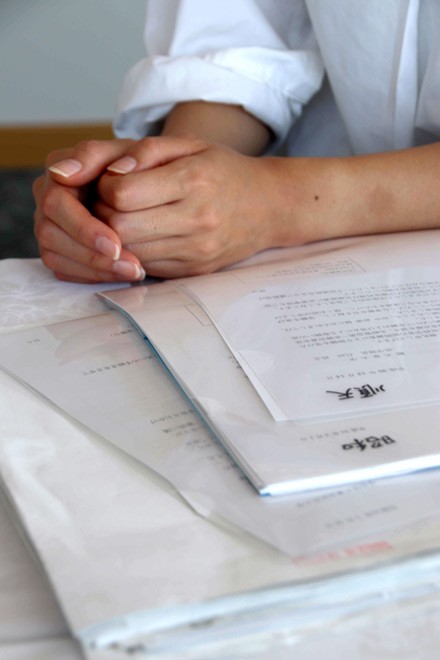 A woman who sued three universities shows documents she received from them. (Tomoko Yamashita)

A woman has sued three universities that unfairly rejected her applications to their medical schools because of her sex and age and then offered what she described as a pittance in compensation.

The lawsuit, filed with the Tokyo District Court on June 5, is seeking a total of 36.21 million yen ($334,370) in compensation from Tokyo Medical University, Showa University and Juntendo University.

The plaintiff said her wrongful failure in the universities’ entrance exams defamed her character and wasted the time and money she spent on cram schools.

“I want them to conduct fair entrance exams for female candidates and those who have previously failed those tests,” she said at a news conference on June 5. “It will be completely meaningless if they hold unfair exams again after time has passed.”

All three universities have acknowledged that their entrance exams were manipulated to favor male applicants, first-time takers of the exams or relatives of alumni.

“My case is just the tip of the iceberg,” she said. “I want them to come up with measures to prevent such unfair entrance exams from damaging people’s lives.”

After graduating from a university on a scholarship, she worked at a medical institution. But the death of her father ignited her ambitions to become a medical doctor. She quit her job and studied for about a year focusing on the entrance exams of medical schools.

With her savings running out, she was close to giving up her dreams of becoming a doctor. But she said she thought, “I made it this far,” and decided to study for one more year with support from her family.

In August 2018, reports emerged that Tokyo Medical University had manipulated the application system that put female candidates and repeat applicants at a disadvantage.

Similar problems were later uncovered at the medical schools of Showa University and Juntendo University.

In November 2018, Tokyo Medical University sent the woman a letter saying that her unmanipulated score made her eligible for the medical school.

She signaled her intention to attend Tokyo Medical University.

But she later learned that she had been accepted at another medical school, and decided against going to Tokyo Medical University, Showa University or Juntendo University.

In May 2019, Tokyo Medical University sent her a letter indicating the university would pay 1 million yen in compensation. Showa University and Juntendo University only offered to refund the entrance exam fees.

“If those universities had conducted fair entrance exams, I would not have spent so much time studying again,” the woman told The Asahi Shimbun.

“It is strange that a school will pay only 1 million yen for all the time that I can never get back,” she said. “And the two schools said they would only return the exam fees. I want them to treat me sincerely. ”

The plaintiff noted that she was not the only woman whose entry to the medical field was unfairly blocked by the universities’ practices.

“Patients vary, and there is a need for diversity among doctors,” she said. “I want the universities to ask themselves again if it is OK to have only male students who are first-time takers enter their medical schools.”

(This article was written by Tomoko Yamashita and Daisuke Yajima.)