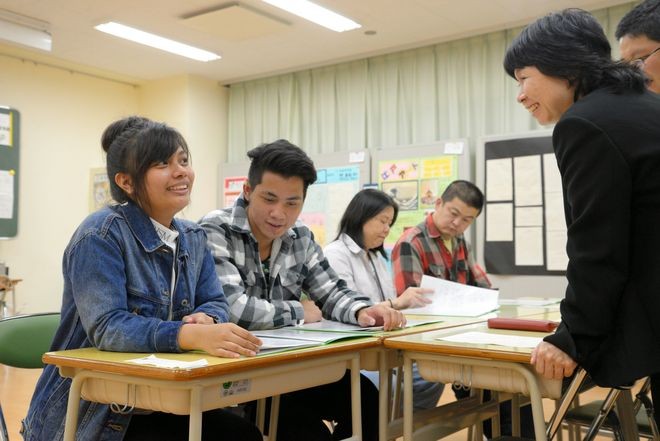 KAWASAKI, Kanagawa Prefecture--Eighteen-year-old Filipino Teodoro Danicah Tan hopes to be a medical practitioner in the future but one thing was derailing her plans: she had not graduated from junior high school in her home country.

But thanks to evening classes of the municipal Nishi-Nakahara Junior High School in Kawasaki, Kanagawa Prefecture, she is back on track to one day fulfilling her dream.

“A teacher was always there to support me whenever I had difficulty understanding Japanese,” Teodoro Danicah Tan said of going to school at night. “The school classes were hard to understand but fun to attend.”

A growing number of local governments are moving to set up new evening classes at public junior high schools, of which there are currently only 33 across Japan.

A decision has been made to open one more in Shikoku. A plan is being floated in Hokkaido for setting up another.

The Tohoku, Tokai and Kyushu regions, however, are expected to remain devoid of night junior high school classes in the foreseeable future.

Newcomers to Japan now account for 70 percent of all evening students at junior high schools, up from only 30 percent a decade ago.

Advocates say similar evening classes should be offered for former students long absent from school, as well as for non-Japanese youths who failed to finish their compulsory education in their home countries. This could serve as a springboard from which they go on to higher schools or land jobs.

With Teodoro hoping to embark on a career in the medical field, she had to start with entering high school, so she worked hard toward that goal.

She obtained a Grade 1 diploma in a Test in Practical English Proficiency operated by the Eiken Foundation of Japan. She was accepted this spring into one of the most prestigious part-time senior high schools in Kanagawa Prefecture.

Slightly more than 20 students are registered for evening classes at Nishi-Nakahara Junior High, which has a total enrollment of about 1,400. The night session students include teens and 20-somethings from Nepal, the Philippines, China and elsewhere, a Japanese octogenarian, and a former long absentee from school who is now in their 20s.

“A night junior high school class is not just about teaching Japanese and other subjects,” said Kenichi Abe, principal of Nishi-Nakahara Junior High. “I hope the students in the class will also learn about rules of Japanese society, such as being punctual, through Japan’s educational practices.”

Evening students at the school join their day counterparts in attending entrance ceremonies, athletic meets and school festivals. That also gives the day students opportunities to interact with their colleagues from the evening classes, who have a variety of backgrounds, and thereby learn about diversity, according to Abe.

The law on securing educational opportunities obligates local governments to provide schooling opportunities, including at evening sessions of junior high schools, to individuals who have passed school age without having received enough compulsory education, irrespective of their nationalities or ages.

The education ministry is calling on prefectural governments to operate at least one night junior high school in their respective jurisdiction. That notwithstanding, Japan’s 47 prefectures only have 33 similar schools in a total of 27 cities and wards in nine prefectures, including Tokyo, Osaka and Kyoto.

Other local governments, including Shizuoka Prefecture and the city of Sapporo, are also weighing plans to open new evening junior high school classes.

Aichi Prefecture is home to many non-Japanese residents, but it has no night classes at public junior high schools in its area.

“We hope to begin with locating the intentions and issues of Nagoya and other municipalities, including if there is demand (for such evening classes),” said an official with the Aichi Prefectural Board of Education.

The Aichi Education and Sports Foundation operates a night class in Nagoya, where students can earn a junior high school diploma if they have attended classes for two years. The prefectural government subsidizes its budget, whereas the city government staffs it with teachers.

The night class, however, is held only three days a week and for two hours a day. Some of those who are providing support to non-Japanese citizens therefore argue the classes alone are not enough for relearning purposes.

All the 17 students who were admitted to the night class this fiscal year have origins overseas, officials said.

Mie is another prefecture where there is no plan even to consider offering a night junior high school class.

Prefectural government officials reasoned that Japanese language classes are currently available in the cities of Suzuka, Tsu and Yokkaichi and learning support is being provided by municipal governments to elementary school and junior high school students.

Figures of the Zenkoku Yakan Chugakko Kenkyukai (all-Japan association of evening junior high schools), which organizes evening classes held at public junior highs, show that newcomers to Japan accounted for 1,215, or more than 70 percent, of all students at similar classes as of September 2018, up 1.5-fold from 787 a decade earlier in September 2008.

“We are the last bastion of compulsory education,” said Akiyoshi Takeshima, a teacher with the municipal Tenma Junior High School in Osaka, who serves as secretary-general for the evening class association. “Japan’s night junior highs respect the dignity and identity of every one of their students, be they Japanese or not in origin, and thereby bear the responsibility for their compulsory education.”

Takeshima is not content with local governments citing a lack of demand, or difficulty in finding demand, as an excuse for being opposed to setting up night junior high school classes.

“It is not easy for residents of communities without an evening junior high school to envisage a need for one,” he said. “You can never tap into a demand for such a school unless you have opened one.”

“There are many youths past school age in the Tokai region who want to get a junior high school diploma as a prerequisite for going on to a senior high school,” said Torcida representative Kiyoe Ito.

Ito pointed out there should be a venue that allows youths past school age to receive an education, be it in the daytime or in the evening.

“The essential thing is to provide points of contact with Japanese society and Japanese people (to those overage youths),” she said. “Schools should probably serve as similar contact points, because they are understood by society as a place for them to be in, and also because schools give them opportunities to forge ties with Japanese.”

Education ministry figures show 122 examinees, a record number over the past decade, sat for the government’s junior high school equivalency examination in fiscal 2017, up from 75 in fiscal 2008. Sixty-six of the examinees were non-Japanese in fiscal 2017.

“Non-Japanese nationals, including Asians, account for about half of all examinees every year, many of them being under 20,” a ministry official said.

* As of April; In parentheses: number of classes, if more than one