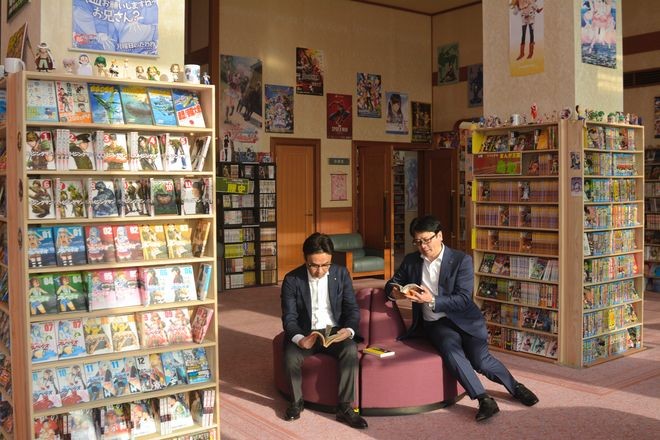 The Green Squalle Sekigane in the Sekiganecho-Sekiganeshuku district of Kurayoshi, Tottori Prefecture, is lined with bookshelves filled with comic books and decorated with figurines. (Tomoko Saito)

The Green Squalle Sekigane, a hot spring facility for day-trippers and overnight stayers, was remodeled as the “Manga Onsen” and reopened on April 7 in the city’s Sekiganecho district.

About 280 bookshelves in the lobby and part of the banquet rooms on the first through third floors are filled with comic books. At least 4,000 figurines are displayed on top of the shelves.

The cost for the “Manga Onsen” is 1,000 yen ($9) for 12 hours during the day while overnight stayers pay at least 5,000 yen per night. Free beverages are available in this dream place for manga enthusiasts.

There is also a women-only space with 30,000 comics on the third floor.

“The collection of 260,000 comic books is the largest among onsen facilities and cyber cafes in Japan,” a Tay Two representative said.

Internet-manga cafe chain operator DiCE said its Ikebukuro outlet in Tokyo, which is known for its large collection, has 180,000 comics.

The Sekigane Onsen resort appears content to ride the coattails of the “Manga Kingdom Tottori” initiative of the prefectural government, which aims to attract tourists with the aid of “Detective Conan,” “GeGeGe no Kitaro” and other popular titles.

According to Kurayoshi city officials, there were 10 “ryokan” inns in the Sekigane Onsen resort, which has some of the most radium-rich hot springs in Japan, during its peak decade starting in 1975.

The Green Squalle Sekigane was originally a public lodging facility owned by the city government.

Travel Sirius Inc., which is based in Maniwa, Okayama Prefecture, and whose operations include a ryokan business at the Yubara Onsen resort in the prefecture, has been running the facility for two years after the city government transferred the ownership to the company.

“There are many destinations (for manga and anime fans) in Tottori Prefecture, including sites devoted to ‘Detective Conan’ and ‘GeGeGe no Kitaro,’ and we hope visitors use the facility as a base to go around the area,” Hiroaki Ikeda, president of Travel Sirius, said. “We also want them to enjoy looking for books in an analog fashion.”

Tay Two President Katsuji Fujiwara added: “Manga is powerful. We want to put the power of comic books to the test.”