EDITORIAL: May the World Cup score a goal for the future of women’s soccer 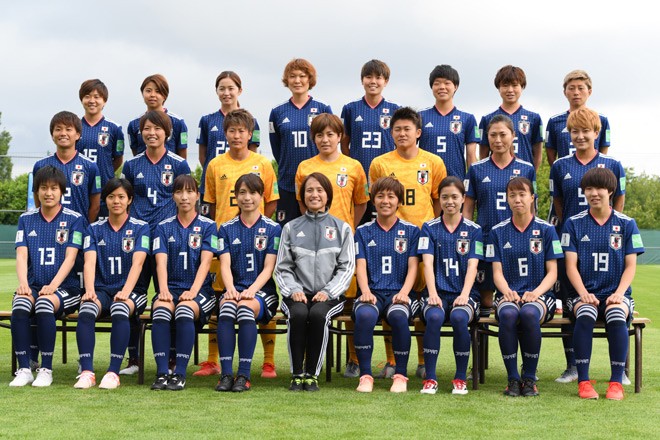 Coach Asako Takakura, front center, with members of the national squad outside Paris on June 6 ahead of the opening of the Women's World Cup (The Asahi Shimbun)

The FIFA Women’s World Cup, a soccer championship, has opened in France.

Two World Cups ago, in 2011, Nadeshiko Japan, as the country’s national team is called, defeated the United States in a thrilling final.

The first World Cup championship for Japan brought positive hopes and vigor to the nation, which was covered in gloom following the Great East Japan Earthquake, tsunami and Fukushima nuclear disaster earlier in the year.

The United States got its revenge on Japan in the final of the following event in 2015, but the Nadeshiko players still left a strong impression, as they drew on their strength of organization to counter the power and speed of their well-built opponents.

We hope the team will do an equally spectacular job during the latest event as well.

The history of women’s soccer in Japan has never been an easy one.

The semipro Nadeshiko League was established in 1989, but a number of corporate supporters withdrew from it in the latter half of the 1990s as a result of the collapse of the asset-inflated economic growth of the preceding decade.

The Nadeshiko League was driven, at one time, to the verge of going out of existence, but it worked hard to put itself back on its feet by forging ties with different parties, including hosting local governments and the men’s professional J.League.

Thanks to the Nadeshiko League’s earnest efforts and its good results at World Cup events, more athletes now aspire to be in the league, which has expanded to comprise as many as three divisions.

That said, athletes in the league are still facing a tough climate.

Nadeshiko League Division 1 contests drew only 1,414 spectators on average per match during the last season. The crowd size has remained modest, except that it rose to 2,796 spectators per match in 2011, the year of Japan’s World Cup victory.

Only 10 percent of the 250 athletes in Division 1 are making a living by soccer. Many are toiling at other jobs or working part time as they play in the league.

There is no quick remedy to the situation, except making down-to-earth efforts to expand the base of fans of women’s soccer, ranging from children to the elderly.

It is significant in that context that several entities, including clubs, high schools and a university, are pursuing their potential in women’s soccer, including by providing opportunities for studying soccer abroad or by joining futsal leagues.

Japan’s national team has adopted new arrangements ahead of the current World Cup.

For the first time, for example, a mental trainer has been accompanying the team from its training camp.

The measure is aimed at relieving athletes from their anxiety so they can exert their full powers throughout the month-long event.

Nadeshiko Japan is also being directed by Asako Takakura, its first female coach.

Female athletes face tough requirements in managing their own physical conditioning, including in dealing with their menses. There is an urgent need for developing more female instructors, given the reality of endless disclosures of sexual harassment in the sporting world.

There are also hopes that the morale of female athletes will rise further if a role model has been established, with an experienced female athlete with a proven track record being assigned to coach a national team.

No one probably thinks any longer that soccer is a sport exclusively for men.

We are not just talking about players and coaches. It is no longer uncommon in Europe to see a female referee blowing a whistle in a men’s match.

The endeavors of women throughout all times and across all borders have turned soccer into what it is today.

We hope the Nadeshiko’s performance in France will also help carve out a bright tomorrow for soccer and a bright future for sports at large.