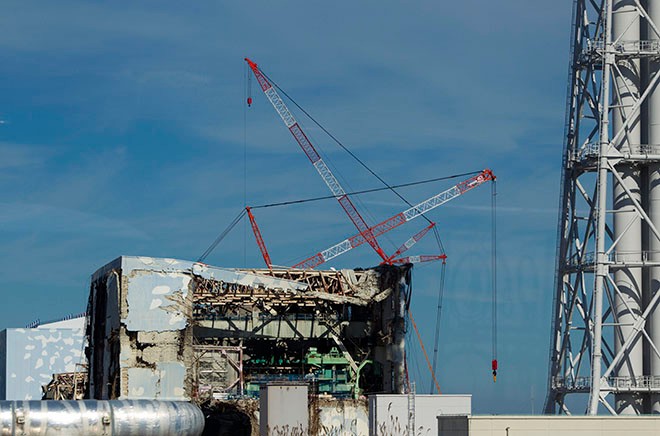 The No. 4 reactor building of the crippled Fukushima No. 1 nuclear power plant is seen through a bus window in Okuma, Fukushima Prefecture, in November 2011. (Pool, AP file photo)

Japan is calling for further efforts to cut its carbon emissions by promoting renewable energy while also pushing nuclear power despite its 2011 Fukushima nuclear plant disaster.

An energy policy paper, adopted by the Cabinet on Friday, said Japan faces the urgent task of reducing carbon emissions by utilities that rely heavily on fossil fuel plants to make up for shortages of cleaner nuclear energy. The call comes as nuclear reactors around Japan are slowly being restarted--despite lingering anti-nuclear sentiment since the Fukushima crisis--after being shut down to meet tougher safety standards.

Japan wants renewable energy's share in 2030 to grow to 22-24 percent of the country's power supply from 16 percent, while pushing nuclear energy to 20-22 percent from just 3 percent in 2017. The report said the cost of renewables also needs to be reduced.

Japanese utilities rely more heavily on fossil fuel plants than those in the United States and Europe, the paper said. Coal and natural gas accounted for 74 percent of Japan's energy supply.

Nuclear energy made up about one-third of Japan's energy supply before 2011, when a massive earthquake and tsunami destroyed the Fukushima No. 1 nuclear power plant's cooling systems, sending three of its reactors into meltdowns.

Despite the government's renewed ambitions for nuclear power, reactor restarts are proceeding slowly as nuclear regulators spend more time on inspections under the stricter post-Fukushima standards, while utility companies have opted to scrap aged reactors instead of investing in additional safety measures.

Nearly half of the 54 reactors in Japan have been designated for decommissioning, and only nine have resumed operation since the accident.

The slow reactor restarts have added to Japan's large plutonium stockpile from spent fuel. Japan has resorted to reducing the 47-ton stockpile by burning plutonium in conventional reactors after the country's fuel recycling program stalled. The plutonium is currently enough to produce about 6,000 atomic bombs.

But the amount is not decreasing, and experts are now calling for more drastic steps to reduce the stockpile amid criticism that it makes Tokyo's calls for nuclear non-proliferation less credible.

About 37 tons of spent Japanese fuel is being stored in France and Britain where it has been reprocessed since Japan lacks the capability to do it at home.

Japan's main reprocessing plant at Rokkasho, where plutonium and spent fuel are stored but reprocessing has not started, says the 10 tons stored in Japan is under close monitoring by the International Atomic Energy Agency and there is no risk of proliferation.

In a recommendation to the government this week, the Sasakawa Peace Foundation, a Japanese policy research group, said Japan should drastically reduce the stockpile to the amount just enough for 2-3 years and keep it under IAEA oversight to ensure the international community of Tokyo's commitment to peaceful atomic use.

The recommendation by a foundation panel goes far beyond government guidelines last year that put the cap at 47 tons, with a pledge to eventually reduce it at an unspecified rate.