Lisa’s In and Around Tokyo: Yamashita Park--Romantic bayside grounds not just for lovers 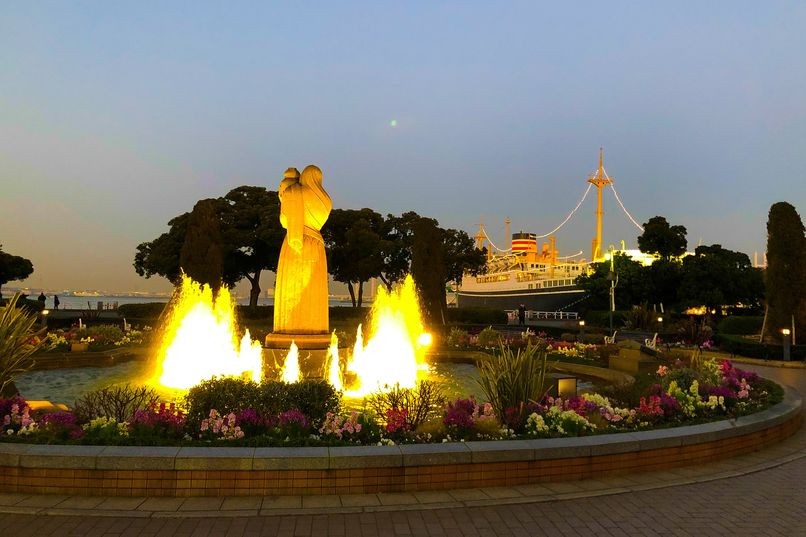 A statue of a sea goddess donated by sister city San Diego stands in Yamashita Park. On the right is the Hikawamaru ocean liner, which now serves as a ship museum. (Photo by Lisa Vogt)

Ah, the pleasant sea breeze ruffles my hair and caresses my cheeks. Listening to the soft splish-splashing of tiny waves lapping along the dock, I walk through Yokohama’s Yamashita Park for the umpteenth time.

It’s a lovely place 24/7, but especially at night with the twinkling lights of the Hikawamaru ocean liner reflecting upon the water, the Marine Tower and the New Grand Hotel lit up all pretty, and Minato Mirai 21’s Ferris wheel slowly rotating in the distance alongside an imposing, inverted pyramid-like Osanbashi Pier that glows green.

It’s very romantic, and I was just about to turn my head to kiss ... and then, darn it, DARN it! It all came crashing down. Asahi Weekly popped into my skull and flipped on a switch.

Why is Yamashita Park called Yamashita Park? Is it someone’s name? And what about the Hikawamaru? Why do Japanese ships often have “maru” in their names?

Above my head, floating question marks appeared one after another. The dreamy moment is lost. Sigh. Why does it have to be this way with me?

It turns out that, ho-hum, Yamashita Park got its name simply because it’s located in Yamashita-cho, which got its name because of its geographic location. The park, however, has a story.

When Japan opened trade in 1859, Yokohama Port and foreign settlements, where non-Japanese were allowed to live and work, were established. The Grand Hotel, which opened in 1873, had a truly oceanfront view as the land the park is situated on today used to be the sea.

In 1923, the Great Kanto Earthquake laid Yokohama to rubble. A wealthy British merchant and leader of the British expatriate community, Marshall Martin, masterminded using the debris from the Kannai area created by the earthquake to reclaim land and make the waterfront park.

As for “maru” in ship names, your guess is as good as mine as there are many theories. The Hikawamaru was named after a Shinto shrine, as are many ships, and she proudly sailed between Japan and the West Coast of North America for 30 years, between 1930 and 1960.

Charlie Chaplin and Jigoro Kano, the founder of judo, were passengers on the “Queen of the Pacific.” Before World War II, Jewish refugees escaping Nazi persecution were taken to North America, and during the war, it was converted to a hospital ship. In the 1960s, she served as a floating youth hostel, and now she’s permanently berthed as a museum ship.

Do visit or revisit Yamashita Park, and savor in your mind’s eye images of the past while enjoying a romantic stroll along the charming bayside park.

This article by Lisa Vogt, a Washington-born and Tokyo-based photographer, originally appeared in the May 26 issue of Asahi Weekly. It is part of the series "Lisa’s In and Around Tokyo," which depicts the capital and its surroundings through the perspective of the author, a professor at Meiji University.