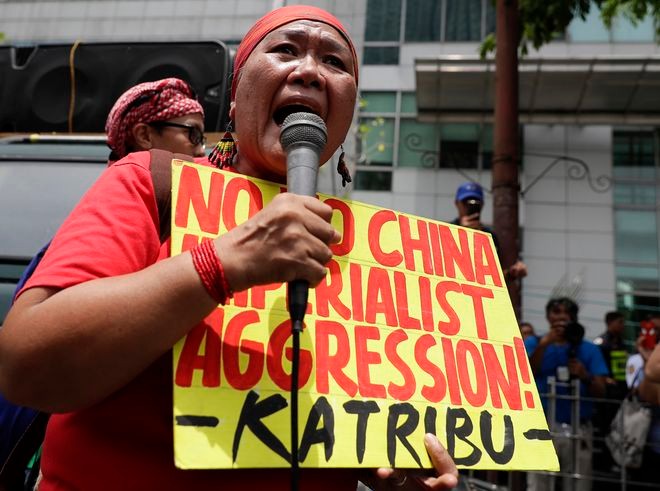 A protester shouts slogans during a rally outside the Chinese Consulate in the financial district of Makati, metropolitan Manila, to mark Independence Day on June 12. (AP Photo)

MANILA--The Philippine defense chief will recommend Manila file a strongly worded diplomatic protest after a fishing boat was hit in the disputed South China Sea by a suspected Chinese vessel that then abandoned the 22 Filipino fishermen as their boat sank.

Defense Secretary Delfin Lorenzana strongly condemned the sinking of the F/B Gimver 1 on Sunday night due to the collision at Reed Bank off the western Philippine province of Palawan and the abandonment of its Filipino crew. He also thanked the Vietnamese fishermen who rescued the Filipinos and brought them to safety.

The sinking is a delicate development in the long-contested South China Sea, which is seen as a potential flashpoint in Asian relations. Tensions escalated after China built seven disputed reefs into islands which can serve as forward military bases and intimidate rival claimant states in a strategic waterway, where U.S. forces undertake "freedom of navigation" patrols.

Lorenzana has sought an investigation of the sinking and said the rescued Filipino crewmen identified the vessel that hit them as Chinese.

Asked if he would recommend any action against China, the defense chief told The Associated Press on Thursday, "A strongly worded diplomatic protest is in order."

The Philippine coast guard said it was checking whether those involved were Chinese fishermen or from other neighboring countries like Vietnam and if the collision was intentional.

"We condemn in the strongest terms the cowardly action of the Chinese fishing vessel and its crew for abandoning the Filipino crew," Lorenzana said. "This is not the expected action from a responsible and friendly people."

He said the F/B Gimver 1 had been anchored "when it was hit by the Chinese fishing vessel," indicating the Filipino fishing boat may have been rammed.

A regional military spokesman, Lt. Col. Stephen Penetrante, said the incident at Reed Bank, which happened at night, appeared "like a hit and run," with the vessel immediately moving away after hitting the Filipino boat in violation of international regulations that require ships to rescue people facing danger at sea.

Philippine officials say Reed Bank lies well within their country's exclusive economic zone, an internationally recognized stretch of water where coastal states have exclusive rights to fish, undersea oil and gas deposits and other resources. But the Philippines has suspended oil and gas exploration in the area due to past Chinese protests.

An international arbitration tribunal in 2016 upheld the Philippines' sovereign rights over its EEZ and invalidated China's claims in virtually all of the South China Sea. China has refused to recognize the ruling.

In past years, Chinese ships have blocked or intimidated Philippine military and civilian vessels at Reed Bank and nearby Second Thomas Shoal, where Philippine marines keep watch on board a long-marooned Philippine navy ship while being constantly watched by Chinese coast guard ships in a years-long standoff.

Presidential spokesman Salvador Panelo said Duterte backs Lorenzana's actions on the boat sinking and added the abandonment of the Filipino fishermen was "uncivilized as it is outrageous."

Panelo called on Chinese authorities to investigate the collision and impose sanctions to the Chinese crew.