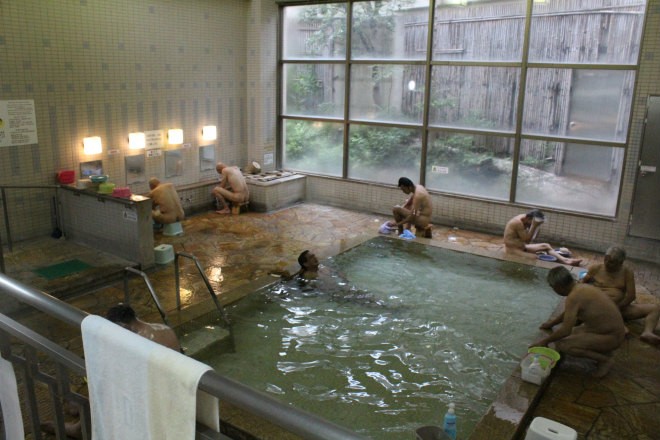 A bathtub before a partition was introduced to separate hot and not-so-hot areas at Hamawaki Onsen bathhouse in Beppu, Oita Prefecture, on Sept. 23, 2018 (Katsutoshi Kato)

BEPPU, Oita Prefecture--At this famed hot spring resort town in southern Japan, some like it hot--very hot in fact--but others do not.

Boasting the largest number of fountainheads and the most abundant supply of onsen water among all such resorts in Japan, Beppu draws hordes of casual and seasoned bathers alike.

But preferences over bathwater temperature has bathers steaming.

Although it cost the city 3.9 million yen ($35,900) and required the bathhouse to shut its doors for one month, the revamp seems to have been received positively.

On a recent weekend, nearly 20 bathers had gathered in the men's section, where one bath is labeled "hot," with the temperature set at 43 degrees, and the other labeled "not so hot," at 40-42 degrees.

"The tub is certainly a bit smaller," said a man in his 60s from Shimonoseki, Yamaguchi Prefecture, who said he prefers not-so-hot baths. "But I didn't have to worry about others when I added cold water. I could relax."

A man in his 70s from Beppu, who opts for the hotter pool, also seemed pleased with the bathtub partition.

"It seems to me that people are happier now, and more people are laughing," he said.

In late September last year, a month before partition work started, a much less serene scene was unfolding.

“Make it hotter, please!” a regular customer in his 80s called out in a sullen voice.

A startled female monitor dashed to a corner of the spacious bathroom, where she poured piping-hot water, collected from a fountainhead, into the tub.

The bathwater was set at between 42 and 44 degrees at the time. Bathhouse workers used to measure and adjust the temperatures every hour at the behest of the city government.

Situated close to National Route No. 10, Hamawaki Onsen is open until 1 a.m., which is uncommon for a municipally operated bathhouse.

About 160,000 people visit the site annually, and with a fee of just 100 yen, tourists have made it a favorite destination as well.

Hot baths, however, are anathema to many of the younger visitors, including children.

“The water is so hot that bathing in it is like an ascetic practice,” quipped a 43-year-old man from Kanazawa, who was visiting Beppu for the first time.

Before the partition was added, both the city government and Hamawaki Onsen were receiving complaints about the high bathwater temperatures.

“The water is so hot that you can't even soak your toes in it,” one complainant said. “I was angrily glared at when I added cold water,” went another.

In fact, the onsen was a favorite haunt of regular visitors who have a soft spot for extremely hot baths exceeding 45 degrees.

Another man, who said he has frequented the onsen since childhood, offered a more triumphant take.

“A hot spring is supposed to be hot,” the man, 88, said. “We've all endured the heat while taking baths and learned what a hot spring is like.”

Hamawaki Onsen is now one of five municipally operated hot spring bathhouses with partitioned tubs. As other facilities have smaller bathtubs, they are unlikely to follow the facility's lead.

Officials of the city government said that at one point the gap showed no signs of closing between the hot and not-so-hot camps.

But the partitions, like that at Hamawaki, seem to have done much to quell the fuss.

It has been said the city bathhouses have relatively high temperatures by overall standards in this country.

At the also popular Takegawara Onsen, the tubs have not been divided into hot and not-so-hot areas, with water temperatures set at 44 to 45 degrees in the men’s section and 43 to 44 degrees in the women’s. Some bathers there almost cry out in pain, saying it takes several minutes just to soak their toes into the hot water.

At Furosen, Kaimonji, Shibaseki and other bathhouses, where tubs in the men’s and women’s sections are divided into two areas by water temperature, the settings are 44 degrees in the hot areas and 41 degrees in the not-so-hot areas in both sections.

Surveys collected from Hamawaki Onsen visitors over a six-month period show they are less dissatisfied about bathwater temperatures following the revamp.

Still, some may argue that the bathwater temperature in the bathhouse's not-so-hot areas, at 40 to 42 degrees, is not low enough.

"If you take a bath at 39 degrees for 15 minutes, you can retain heat better afterward," said one researcher with a spa powder manufacturer that has signed a comprehensive tie-up agreement with the Beppu city government.

"You may feel somewhat unsatisfied, but please take baths at moderate temperatures for the sake of your health,” he said in a column in an August 2018 city government bulletin.

City authorities are enlisting the help of medical experts to come up with scientific evidence for the health effects of hot springs.

"Some people may long be accustomed to taking hot baths, but we suggest they try taking less-hot baths for a longer time to recover from fatigue," a city government official said. "I hope Hamawaki Onsen’s facelift will serve as a milestone for a change in people’s awareness.”